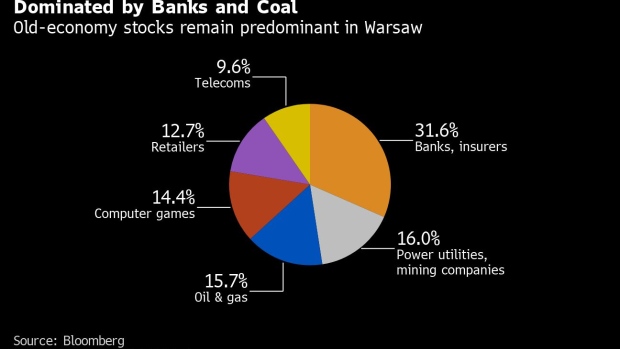 (Bloomberg) -- Polish e-commerce platform Allegro’s plans for what could be Warsaw’s a biggest-ever initial public offering should help the country’s stock market cut its reliance on old-economy industries and raise the profile of Polish technology stocks, according to analysts.

Allegro is expected to achieve an equity value of about $13 billion, according to a person familiar with the transaction, with about 20%-25% of the company to be floated. For Trigon Dom Maklerski SA analyst Maciej Marcinowski, that should be enough to meet the Warsaw bourse’s criteria for an extraordinary revision of the WIG20 benchmark’s membership, clearing the way for Allegro to displace MBank SA.

Such a revamp, with an expected 6% weighting for Allegro, has the potential to boost the gauge’s performance in the long term, by reducing the still-dominant share of stagnant banking and utility stocks, according to Marcinowski and Aviva Investors Poland TFI SA’s head of equity investment Rafal Janczyk.

In recent years, near-zero interest rates and FX-mortgage lawsuits have held back the country’s banking industry. Meanwhile, the hands-on government’s reforms, consolidation proposals and rising costs of coal power all hit valuations of state-run companies, rendering the WIG20 an underperformer.

In 2020, the index has lagged peers both in Western Europe and emerging markets, despite Poland’s coronavirus infections remaining among the lowest in the region. Soaring valuations of newer index members -- video game studio CD Projekt SA and grocer Dino Polska SA -- couldn’t offset the gloom.

“Allegro’s IPO is the big thing for Warsaw. It shows that the structure of the market is changing towards the new economy and brings new reasons to invest in the Eastern Europe, even as local investors are not ready to accommodate such high valuations,” Andras Szalkai, a fund manager at Raiffeisen Kapitalanlage GmbH in Vienna, said in a phone interview. “Allegro’s success may also incubate new entrepreneurs, as was seen in the case of CD Projekt causing a boom in the local gaming industry.”

Poland’s new wave of stock debuts is a positive phenomenon, Barlomiej Chylek, equity analyst at NN Investment Partners TFI SA, told Bloomberg by phone. Still, he cautioned investors against expecting quick returns in the index given demanding valuations of CD Projekt and Allegro. Any short-term uplift to Poland’s benchmark will also be tempered by local investors dumping other stocks to make room for Allegro in their portfolios, Aviva’s Janczyk said.