For Amazon.com Inc., blowout growth is no longer enough.

Tuesday’s news of surging sales and profit elicited shrugs from Wall Street, with the shares extending a rare stretch of underperformance that has now lasted for several months. But analysts agree: this is only a temporary lull after years of strong gains, and one investors should take advantage of.

The e-commerce giant’s stock has fallen nearly 3 per cent since the end of August, lagging behind the S&P 500 Index’s 11 per cent gain as traders developed what JPMorgan Chase dubbed “FANG fatigue,” and instead turned to new favorites like small-caps and value plays. The strong outperformance that marked the early months of the coronavirus crisis stalled as the emergence of COVID-19 vaccines pointed to an environment when pandemic winners were not the only place to find huge demand and growth.

Since vaccines began to become available late last year, “there hasn’t been as much new money going into large-caps, which acts as something of a natural headwind,” said Matt Orton, vice president at Carillon Tower Advisers Inc. This reflects more a change in fund allocation, as opposed to sentiment, which remains extremely positive, he said.

“When you have such solid fundamentals it is only a matter of time before the stock picks up,” Orton said in a phone interview. “E-commerce and cloud computing aren’t going anywhere, and Amazon is a leader in both.”

Amazon’s fourth-quarter report was characteristic of its singular growth qualities. Net earnings per share more than doubled, while its operating profit climbed almost 80 per cent. Revenue rose more than 40 per cent, an unparalleled rate for a company of Amazon’s size. Still, the stock fell 2 per cent the day after the report, with the results offset by the news that Chief Executive Officer Jeff Bezos will step down from his post later this year. It rose less than 1 per cent on Friday.

While the stock remains up more than 60 per cent over the past year, those gains were concentrated in the first half of 2020 when the pandemic amplified a boom in online shopping. The underperformance since may partly reflect the prospect of business conditions starting to normalize during 2021.

Amazon has trailed both the Nasdaq 100 and the Russell 2000 over the last six months and is also the weakest performer among U.S. names with valuations exceeding US$1 trillion; while Apple Inc., Alphabet Inc., and Microsoft Corp. have all notched all-time highs in 2021, Amazon is about 5% below its most recent record, which was hit in September. 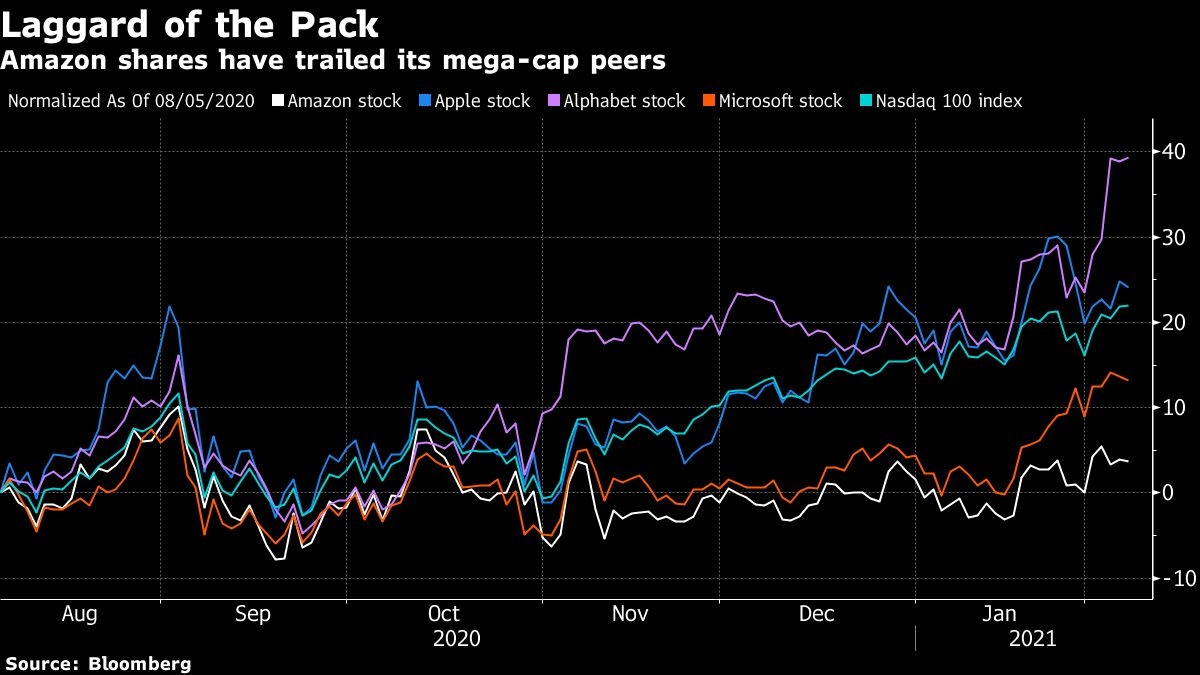 Despite this relatively tepid performance, Wall Street has hardly thrown in the towel. According to data compiled by Bloomberg, 51 firms recommend buying the stock, while only one has a neutral rating and none have a bearish view, resulting in a bullish consensus that’s unmatched among big names. The average analyst price target implies upside of roughly 20 per cent, and bulls see even rosier long-term prospects.

“There was really nothing to pick at in the numbers, and my sense is that profitability will really start to inflect in the second half of the year, when I bet it becomes an unbelievable stock,” said Michael Levine, an analyst at Pivotal Research Group who recommends buying Amazon.