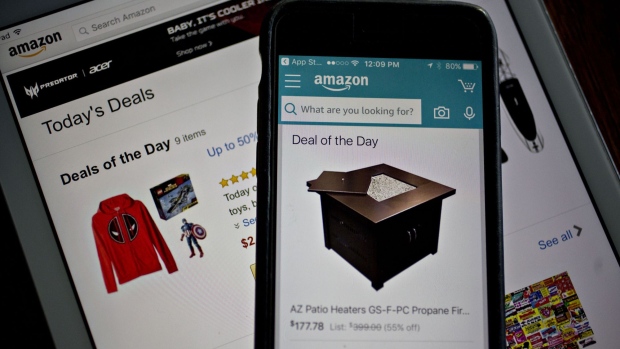 The Amazon.com Inc. application displays "Deals of the Day" on an Apple Inc. iPhone and iPad in Washington, D.C., U.S., on Monday, Dec. 5, 2016. Amazon.com unveiled a new security tool for cloud customers last week, part of a slew of product announcements designed to fend off competition from Microsoft Corp., Alphabet Inc.'s Google and others in the fast-growing cloud computing market. Photographer: Andrew Harrer/Bloomberg , Bloomberg

(Bloomberg) -- Third-party marketplaces like the one created by Amazon.com Inc. are flooding the U.S. market with imitation goods, according to a report commissioned by a group of retailers and manufacturers.

Imports of such goods cost U.S. retailers about $54 billion a year in lost sales, according to the study for the Buy Safe America Coalition, which includes backers such as Walmart Inc., Target Corp. and 3M Co. Most of the contraband products come from China, the group said in a statement Wednesday.

The report represents a new salvo in a long-running lobbying campaign as Congress considers legislation -- opposed by Amazon and Facebook Inc. -- that would require digital marketplaces to verify information about third-party merchants. The Buy Safe coalition is also stepping up its warnings about imitation goods as global supply snarls threaten to drive more shoppers to sellers pushing fakes.

“Given the supply-chain disruption at the moment, these counterfeiters are going to be really ramping up their production,” said Michael Hanson, a spokesman for the coalition. “It was growing before, and the pandemic accelerated that because there are so many more people shopping online.”

Last year, Amazon said it invested more than $700 million and employed over 10,000 people to protect against fraud and abuse. The company fights counterfeiting with controls based on machine-learning abilities and human investigation, according to a report on its website. It also started a “counterfeit crimes unit” that builds and refers cases to law enforcement agencies.

Annual U.S. imports of imitation goods now include $1.5 billion in toys and $6.8 billion in cell phones, among other products, according to the Buy Safe report, which was conducted by economic research firm John Dunham & Associates. Cosmetics, surgical masks and automobile brake pads are affected as well, said Hanson, who also serves as executive vice president of public affairs at the Retail Industry Leaders Association.

Members of the coalition are backing the so-called INFORM Consumers Act, which would require digital marketplaces to collect information about some third-party sellers such as their government ID, tax ID and bank account details. Opponents have cited privacy concerns in arguing against it, and warned of a harmful impact on legitimate merchants.

The bill is set for a legislative hearing Thursday in a Congressional committee, Hanson said.