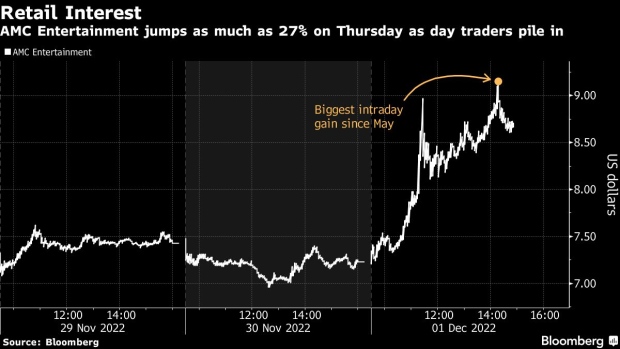 Pedestrians pass in front of an AMC movie theater at night in the Times Square neighborhood of New York, U.S., on Tuesday, Oct. 15, 2020. AMC Entertainment Holdings Inc. is considering a range of options that include a potential bankruptcy to ease its debt load as the pandemic keeps moviegoers from attending and studios from supplying films. , Bloomberg

(Bloomberg) -- Shares of AMC Entertainment Holdings Inc. surged by the most in six months after investors piled into bullish bets on the stock.

The movie-theater operator -- one of the poster children for the meme-stock mania of 2021 -- skyrocketed 27% Thursday to $9.15, its biggest jump since May 12. Trading activity in call options was triple the average over the past 20 days, with investors snapping up contracts that were out of the money earlier this morning.

Day traders also electrified social media chatrooms and message boards touting the shares. Thursday’s rally came as the “AMC” ticker symbol was trending on the popular trader chatroom Stocktwits, and it was among the most mentioned on Reddit’s WallStreetBets forum. However, buying demand from retail traders was lackluster. Individuals on Fidelity’s platform were net sellers as of 2 p.m. in New York.

AMC Entertainment attracted individual investors over the past two years as they sought to rail against short-sellers who bet that share prices will decline. More than 20% of AMC shares available for trading are currently sold short, financial analytics firm S3 Partners data show. The stock is down 50% this year after a nearly 1,200% surge in 2021.