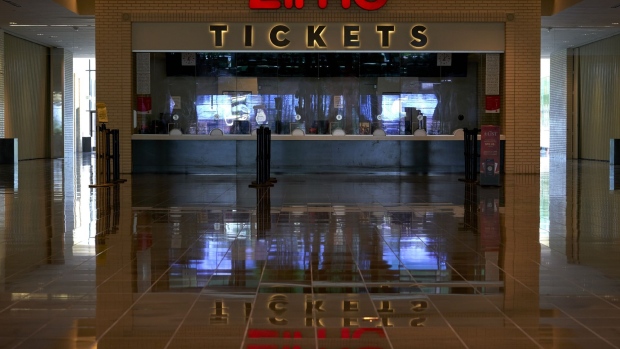 AMC Entertainment Holdings Inc. jumped as much as 56 per cent on a media report that Amazon.com Inc. has discussed a potential takeover of the largest U.S. movie-theater owner, though it pared the gains when another outlet said the companies aren’t talking.

It’s unclear if the talks are active or will lead to a deal, the U.K.’s Mail on Sunday newspaper said, citing unidentified sources. Amazon doesn’t comment on speculation, a spokeswoman said Monday. AMC didn’t immediately respond to requests for comment.

The trade publication Deadline reported Monday morning that “there are no talks,” citing unidentified sources.

AMC shares rose as much as US$2.31 to US$6.41 in New York trading. They were up as little as 19 per cent minutes after the Deadline report and were up 36 per cent to US$5.58 at 11:28 a.m. The stock was down 43 per cent this year through last week, battered along with the rest of the cinema industry by a worldwide shutdown for the coronavirus pandemic.

AMC’s bonds surged on reports of the talks with Amazon, and were among the top gainers in the U.S. high-yield market on Monday, according to Trace bond-trading data. AMC’s senior subordinated bonds due 2026 were up as much as 10 cents on the dollar to 32 cents, data shows.

The reported talks are unlikely to spark a price war for AMC, Bloomberg Intelligence media analyst Amine Bensaid said in a note. “Movie-going is unlikely to fully bounce back in a post-COVID-19 world and may create risks for an acquirer,” he said. “AMC’s elevated debt load and unavoidable fixed costs mean the company’s near-term financial flexibility will be severely challenged.”

AMC showed its concern about existential threats with its reaction to last month’s straight-to-streaming release of the kids movie “Trolls World Tour,” which Comcast Corp.’s Universal Pictures crowed about as a high-grossing success. AMC said it would no longer show Universal’s movies.

Chinese real estate tycoon Wang Jianlin, who spent billions of dollars building one of the world’s biggest cinema operators, controls AMC through his closely held Wanda Group. Wanda acquired AMC in 2012 for US$2.6 billion as part of its expansion into entertainment. It subsequently acquired Nordic, Carmike and Odeon & UCI Cinemas.

Along with its vast retail and web-services operations, Amazon is an active player in streaming with its Prime Video platform, along with releasing original films. Like Netflix Inc., Amazon is eager to shore up its burgeoning position in Hollywood as new and old players scrap for content deals. Buying a theater chain would guarantee another outlet for its movies.

Eric Wold, an analyst at B. Riley FBR, wrote to clients Monday that a cash offer for AMC, which is on track for its fourth straight year of stock declines, wouldn’t appeal to investors. A cash offer would be more likely than a stock deal, given AMC’s depressed stock price, he said.