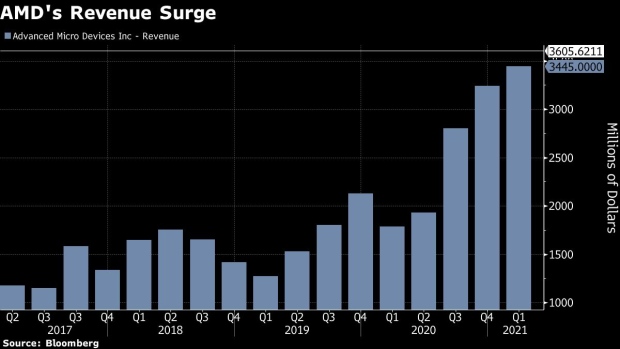 AMD, the second-largest maker of computer processors behind Intel, predicted third-quarter revenue will be about $4.1 billion, plus or minus $100 million. On average, analysts had projected revenue of $3.8 billion. The company also raised its annual outlook and now expects revenue to increase by 60% up from a previous forecast for 50%.

Chief Executive Officer Lisa Su has brought the company back from the brink of irrelevance with a raft of new products that customers see as competitive with Intel’s offerings for the first time in years. Investors have poured money into AMD’s stock over the last five years, expecting Su’s changes to result in higher market share and earnings. So far this year, however, the stock has slid about 2%, compared with the Philadelphia Stock Exchange Semiconductor Index’s 13% gain, as the market looks for evidence of sustained progress.

“We are growing significantly faster than the market with strong demand across all of our businesses,” Su said in a statement.

AMD shares rose 2.2% in extended trading following the announcement after closing at $91.03 in New York.