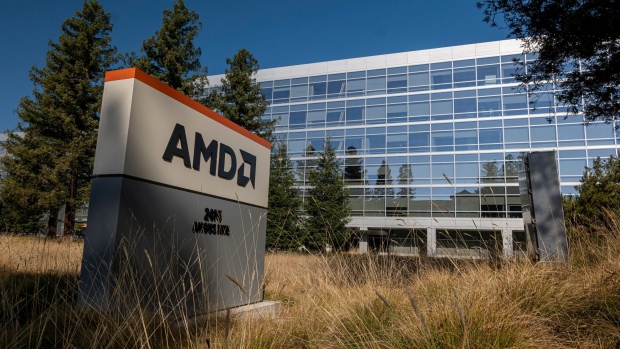 Revenue in the period was about $5.6 billion, the company said Thursday in a statement, giving an early peek at numbers that were expected in the coming weeks. The average analyst estimate -- and the company’s own forecast -- had been about $6.7 billion.

Like its peers, AMD blamed the PC market for hurting sales, citing weaker demand and a build-up of inventory in the supply chain. The third quarter also will include $160 million in writedowns related to inventory, pricing and other issues, the company said.

AMD is the latest company related to the PC industry that has warned investors that the market for its products is imploding. Nvidia Corp. and Intel Corp. have already shaved billions off their projections and said they need to burn off stockpiles of unused parts.

While AMD has been making market-share gains at Intel’s expense, the company isn’t immune from the collapse in demand for PCs. Consumers who splurged on technology during pandemic lockdowns are now cutting back spending on big-ticket electronics as they confront recession fears and inflation.

The stock fell about 5.1% in premarket trading after closing at $67.85 in New York on Thursday. Even before the drop, the shares were down 53% this year, part of a broader pullback for the chip industry. Other semiconductor makers, including Nvidia and Intel, also slipped after AMD’s report.

AMD plans to report full third-quarter earnings on Nov. 1, followed by a conference call to discuss the results. The company said it doesn’t plan to give any additional financial updates before then.

Reflecting its relatively strong performance compared with Intel, AMD said its gross margin -- the percentage of sales remaining after deducting costs -- will be about 50% in the quarter. That’s down from an earlier projection but wider than Intel’s once industry-leading profitability levels.