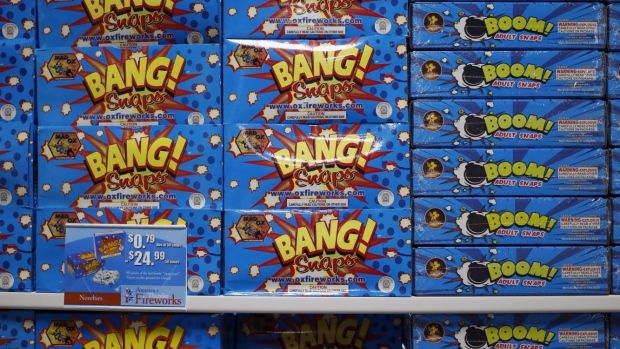 Fireworks for sale at a store in Shepherdsville, Kentucky, US, on Saturday, June 25, 2022. Overseas shipping, transportation in the US, rising insurance costs and labor shortages have led to canceled Firework displays in some US cities, reports the Associated Press. , Bloomberg

(Bloomberg) -- Even with prices for fireworks surging, Americans are poised to set off more sparklers and Roman candles this July Fourth than last year when purchases boomed.

Demand for fireworks has roared back during the third summer of the pandemic as social activities have resumed in earnest. The industry prepared for more celebrations by boosting fireworks imports by 27% to 185 million pounds in the first four months of this year, according to data from US International Trade Commission. These gains come after imports jumped 63% in 2021.However, increasing inventories hasn’t eased prices. More than 90% of fireworks sold in the US come from China, which has had its ports and factories severely disrupted by Covid-19. Widespread inflationary pressures, such as rising costs for labor and shipping, have also weighed on the industry.

Fireworks are coming into the US at a “record-setting pace,” said Jay Zagorsky, a professor at Questrom School of Business at Boston University who has studied the firework industry for years.

Demand will stay strong this summer and beyond as people return to celebrations, “but also because it’s getting more expensive to travel, and lighting off fireworks is something you can do that’s relatively inexpensive,” Zagorsky said.

Governments are playing a role, too. Even before the pandemic, several states relaxed their firework laws. Now only Massachusetts has a statewide ban. And what regulations are on the books often do little as a deterrent. Take New York City, which has seen a boom in displays in recent years despite all fireworks in the city being illegal.

In May, the US consumer price index rose 8.6% from a year ago and 1% from April. Phantom Fireworks, which has stores from Nevada to Maine, has boosted its retail prices even higher. They are up about 30% from a year ago, mirroring what other industry participants said they’re now charging. Transportation costs have been a big part of that increase because fireworks need more space for safety precautions.

Professional displayers are also dealing with inflation. New York state, which is preparing to host a fireworks show in Albany, saw costs increase 9% from last year, according to event sponsor, Golub Corp., an operator of grocery chains Price Chopper and Market 32.

While there’s plenty of fireworks for consumers to purchase, professional fireworks, which are less than 5% of the total industry, have been harder to find. One big hurdle is that these products are experiencing bigger shipping delays than consumer fireworks.

The problem is so acute that William Bulifant, owner of Dominion Fireworks in Petersburg, Virginia, said he’s been getting requests from other display companies asking if his firm has any extra fireworks. His company just received a shipment from China two weeks ago, but is still waiting for more.

“Many are getting desperate,” Bulifant said.

Low supplies of professional products has caused many firework shows to be canceled or delayed. Another issue for companies that put on big displays is a dearth of workers. Matt Shaw, owner of Skylighters Fireworks in Buffalo, New York, said it’s difficult to find people who have the government certifications to work in the industry.

“We are so glad this Independence Day is a Monday as nobody wants to work on weekends,” Shaw said.

Shaw said his firm is “busier than ever,” but it has the fireworks it needs to meet demand because it has built up inventory levels that will likely get it through next year.

“We saw this coming,” Shaw said of the supply-chain woes. “We just jumped the gun and placed orders knowing, hopefully, that we were gonna have great shows to present.”