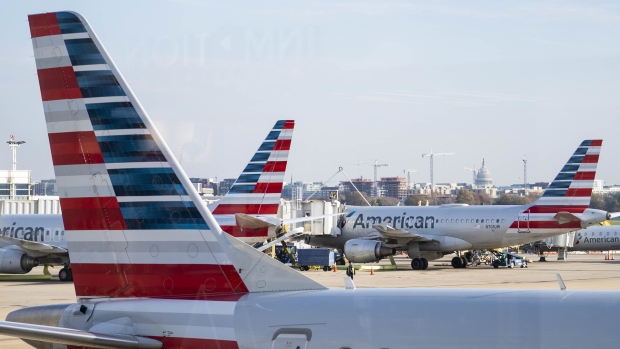 American Airlines Group Inc. aircraft at Ronald Reagan National Airport (DCA) in Arlington, Virginia, U.S., on Wednesday, Nov. 25, 2020. While passenger volumes are less than 40% of last year’s levels, late demand for holiday travel has been driven by fares that are substantially lower than typical as airlines desperately try to fill seats during the coronavirus pandemic. , Bloomberg

(Bloomberg) -- American Airlines Group Inc.’s top commercial officer didn’t hold back at an antitrust trial focused on the carrier’s alliance with JetBlue Airways Corp.: Less competition has been a boon to the bottom line.

“Consolidation has been good for us,” Vasu Raja, American’s chief commercial officer, said Friday in testimony at a federal court in Boston. “What consolidation looks like in the future, we don’t know.”

The unvarnished appraisal may not win many fans among travelers who equate fewer options with higher airfares. The comments came as the Department of Justice tries to quash the two airlines’ partnership by arguing it gives them excessive power over pricing and access in the Boston and New York markets. American and JetBlue have defended their partnership, which they’ve dubbed the Northeast Alliance and involves shared routes, bookings and passengers on most flights in Boston and New York.

US antitrust enforcers say it amounts to a “de facto merger” at the expense of travelers, something the two airlines deny.

Raja also testified that former American Chief Executive Officer and current Chairman Doug Parker is jokingly referred to internally as the “godfather of consolidation.” Parker, who is expected to take the stand in the case next week, oversaw American’s merger with rival US Airways in 2013 and strategic partnerships with other airlines such as Alaska Air Group Inc.

But consolidation hasn’t always delivered the type of synergies promised. Raja, who oversees areas such as network planning and alliances, testified Friday that poor accounting practices dating from the US Airways deal led American to ultimately surrender seven slots at John F. Kennedy airport in early 2019. The carrier wasn’t really sure how many slots it held at JFK, he said.

“When we put these things together, we lost track of the number of slots and slot IDs,” Raja said. “I’m a little beside myself that that happened.”