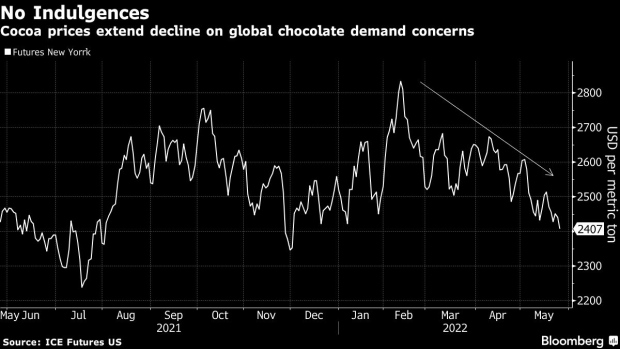 (Bloomberg) -- Americans are eating less chocolate as the sweet treat gets more expensive.

With inflation hitting US shoppers at the fastest pace in decades, indulgences like candy are becoming a casualty. Chocolate sales have been dropping for three straight quarters. Volumes sold at retail shops in a recent 13-week period slipped 6.3%, while prices rose 11% from a year ago, according to Chicago-based market researcher IRI.

Cocoa markets are tanking on the decrease in chocolate binging. Futures prices in New York reached the cheapest level this year on Wednesday.

It’s not just the US that’s abandoning its sweet tooth. Across the Atlantic, European Central Bank Vice President Luis de Guindos on Wednesday said the euro-area will face “much lower growth” than previously expected. Europe is the world’s largest consuming region of chocolate. Meanwhile, China is forecast to miss its official growth targets as its Covid Zero policy hammers its economy. Asia’s chocolate eating has increased the swiftest in recent years.

Retail prices are rising partly because of higher costs for chocolate makers including Hershey Co. Supply chain chaos caused by the pandemic and now the war in Ukraine have been spilling over into commodity markets including cocoa.

Citigroup Inc. expects a “very moderate surplus” in world cocoa balances in 2022-23, following a deficit in the current season ending in September. The bank has also warned about the impact on demand coming from the war in Ukraine and China’s lockdowns.

In another sign of slack demand, reserves of cocoa, the raw material that goes into chocolate-making, are rising at ports.

The July contract slid as much as 1.9% to $2,395 per metric ton on ICE Futures US, the lowest for a most active contract since early December. Lower prices reduce cost pressures for chocolatiers like Hershey Co. and Mondelez International Inc.

In other soft commodities, arabica coffee and cotton rebounded from losses a day earlier, while raw sugar was little changed. The broader markets are awaiting Federal Reserve minutes to gauge the central bank’s pace of tightening.