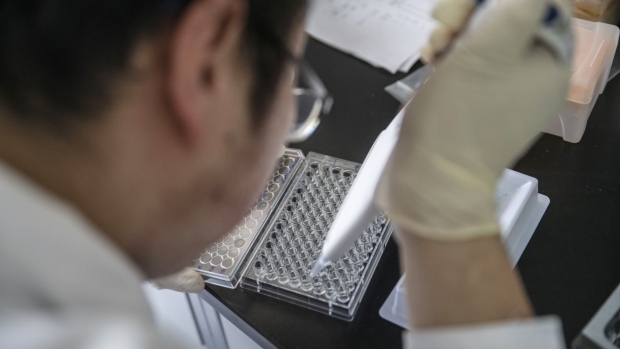 A researcher prepares samples inside a laboratory at BeiGene Ltd.'s research and development center in Beijing, China, on Thursday, May 24, 2018. Biotech company BeiGene is worth about $9 billion on the Nasdaq, a multiple of about seven times its 2016 IPO, and its experimental cancer drugs are being closely watched globally. Photographer: Gilles Sabrie/Bloomberg , Bloomberg

Even a global pandemic hasn’t shaken optimism in one of the most volatile industries.

As COVID-19 dominates headlines and sparks billion-dollar share moves, biotech analysts are still pitching massive returns in companies that have nothing to do with developing a drug or vaccine for the disease.

Wall Street analysts expect 105 of the 209 members of the Nasdaq Biotechnology Index to double over the next 12 months, data compiled by Bloomberg show. With the index trading just off a record high, many of the Street’s biggest bulls favor companies in areas like women’s health and cancer.

Macrogenics Inc., Cytokinetics Inc. and Akebia Therapeutics Inc. are among drugmakers that have doubled so far this year. But the boom-or-bust nature of drug development has burned investors in other stocks, even after analysts piled on praise. Sage Therapeutics Inc.’s failed depression drug study, AnaptysBio Inc.’s eczema flop and Genfit’s NASH woes in recent months have wiped out millions in market value.

Cantor Fitzgerald’s Louise Chen has a US$13 target on TherapeuticsMD, or more than 10 times where the stock has been trading lately. The women’s health company has struggled to balance spending with the need to promote products such as its Annovera birth-control ring. Seven of nine analysts that follow the stock recommend buying shares and their average target implies a 574 per cent surge in the next year. At the same time, money managers like Deerfield Management Co. and Frontier Capital Management Co. have thrown in the towel on their bets this year. And JPMorgan this week cut its rating on TherapeuticsMD to a hold equivalent, citing COVID-19 disruptions.

Chen also carries the price target with the second-highest implied return in the Nasdaq Biotech Index. Her call that Evolus will reach US$35 in a year suggests a gain of 770 per cent. She has maintained that target since June 2018 despite the stock’s 85 per cent drop since then, data compiled by Bloomberg show. The “performance beauty company” has struggled to meet early expectations for sales of its wrinkle treatment -- and Botox rival -- Jeuveau, after the pandemic closed practices.

Chen didn’t respond to requests for comment about her targets.

JMP’s Jason Butler likes Precigen’s emerging cancer-therapy pipeline ahead of key data readouts later this year. JMP has served as a lead manager for each of the company’s last two share offerings. Precigen’s value has been cut in half over the past year. The stock has two buy ratings and two holds, according to data compiled by Bloomberg.

Goldman Sachs analyst Salveen Richter expects Sage to regain levels last seen before a December trial flop in major depressive disorder. Her price target on the stock is US$190, more than double the Street average of US$73 and about five times the current price. It is worth noting that Goldman has acted on each of the company’s offerings since going public in 2014 and Richter has recommended shares since picking up coverage four years ago. She is focused on new data for the depression drug that are expected later this year and in 2021.

The US$70 target that Canaccord Genuity analyst John Newman has for Atara implies almost 400 per cent upside and is nearly double the expectations for his nearest peer, Mizuho’s Salim Syed. The stock’s peak was US$65.56, in mid-2015. Newman’s model focuses on the company’s lead program for post-transplant lymphoproliferative disease. Data for Atara’s earlier-stage multiple sclerosis drug will be posted Friday afternoon ahead of the European Academy of Neurology’s congress, which is virtual this year. Newman says promising results there could also spark a gain in the shares.

Syed’s call for Unity to be worth US$33 -- compared to about US$7 currently -- stands out on Wall Street. Syed has kept that same target since starting coverage in September 2018 despite the stock’s 61 per cent slide. This long-term bet hasn’t helped Syed’s overall track record -- his calls have lost 16 per cent of their value in the past two years compared to a 3.1 per cent drop for peers, data compiled by Bloomberg show. Syed says the second half of the year is “catalyst-heavy” for Unity and he expects investor interest to pick up in the coming months.