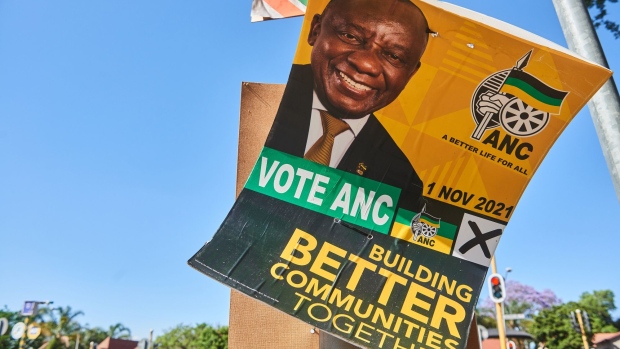 (Bloomberg) -- The African National Congress’s share of the South African vote fell below 50% for the first time since apartheid ended more than a quarter century ago.

The party secured 46% of the ballots cast in the Nov. 1 municipal election, down from 54% in the previous local-government poll five years ago, the Independent Electoral Commission of South Africa said on Thursday. The opposition Democratic Alliance garnered 21.8% of the vote, down from 27% in 2016, while the populist Economic Freedom Fighters got 10.4%, compared with 8.2%.

The vote was the first municipal ballot since President Cyril Ramaphosa won control of the ANC in 2017 and set about trying to rebuild support for the party, which plummeted during his predecessor Jacob Zuma’s scandal-marred rule. The ANC has lost support because of voter dissatisfaction with poor service delivery, crumbling infrastructure within towns and cities, record unemployment and frequent power outages.

The results mean the ANC will again have to turn to smaller parties to form coalition governments in urban centers. As was the case in the 2016 municipal polls, this year’s vote -- with the lowest turnout in South Africa’s democratic history -- left urban centers including Johannesburg, Tshwane and eThekwini, which includes the port city of Durban, without an outright winner.