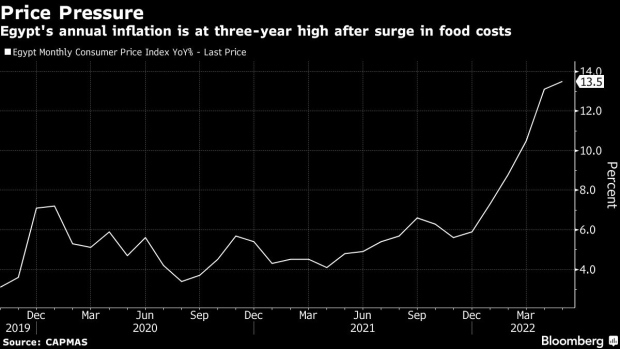 Egypt’s biggest interest-rate hike in nearly half a decade may not be enough to cool off consumer prices, leaving the central bank with a dilemma as it plots policy this week.

With annual inflation quickening for a sixth straight month and a hawkish pivot by central bankers around the world, the urgency is likely still there for Egypt to add to its two rate increases since March.

But in a reminder of the challenges facing one the Middle East’s most indebted economies, Finance Minister Mohamed Maait has warned about the worrying cost of further hikes for a government that already spends nearly half its revenue on interest payments.

In the view of most economists, further monetary tightening is warranted at a meeting on Thursday, with a majority of forecasters seeing increases of between one and two percentage points. Only three analysts in a Bloomberg survey of 13 predict the benchmark deposit rate will stay at 11.25%.

Yet even some expecting a rate hike are unsure it’s a done deal, especially with monthly inflation showing signs of a slowdown.

“The decision will be close, with the bank likely to seriously consider both bigger hikes, and remaining on hold,” said Simon Williams, chief economist at HSBC Holdings Plc for Central & Eastern Europe, the Middle East and Africa.

Until now, the focus has been on containing inflation and restoring the appeal of Egypt’s local debt with overseas portfolio investors after $20 billion in foreign outflows this year from the domestic debt market.

A measure of relief for Egypt has arrived by way of its rich Gulf allies, which have pledged more than $22 billion in deposits and investments. The government is also in talks on a program with the International Monetary Fund.

Annual inflation has reached its highest level in three years as food and energy costs spiked after Russia’s invasion of Ukraine. A devaluation of the Egyptian pound in March -- followed by intermittent bouts of weakness since then -- has added to pressure on consumer prices.

The fact that the pound “remains under near-term pressure” may be grounds to push for tighter policy, said Carla Slim, an economist at Standard Chartered Plc.

Policy makers have already responded by raising rates by a cumulative 300 basis points in the past three months. After May’s decision, the central bank said the elevated pace of price increases “will be temporarily tolerated” relative to its target of 7%, plus or minus two percentage points, on average in the fourth quarter.

Inflation has been above an annual 13% in April and May, meaning both Egyptian policy rates are negative when adjusted for prices.

Esraa Ahmed, an economist at Cairo-based Al Ahly Pharos who expects a hike of as much as 200 basis points, said the central bank “might prefer to act boldly” since developments abroad are “persistently feeding into domestic pressures.”