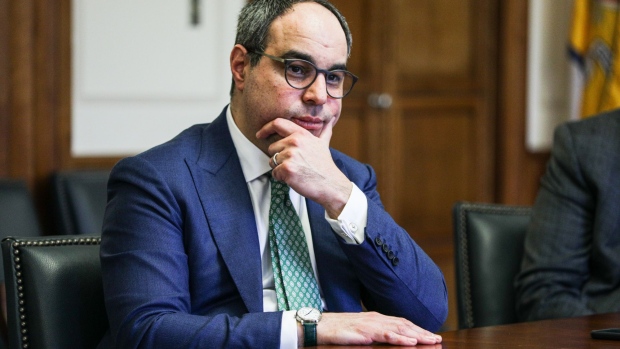 Jonathan Kanter, assistant attorney general of antitrust for the U.S. Department of Justice, during an interview in Washington, D.C., U.S., on Thursday, March 17, 2022. Kanter is planning an aggressively activist approach to his new job - to reverse decades of lax enforcement that he said has allowed companies to dominate industries and thwart competition. , Bloomberg

(Bloomberg) -- The Justice Department’s top antitrust official has been barred from working on monopoly investigations of Alphabet Inc.’s Google as the department wrestles with whether he must recuse himself because of his previous work for the search giant’s rivals, according to people familiar with the matter.

Jonathan Kanter, a longtime advocate for antitrust enforcement against Google, was brought in by the Biden administration to tackle difficult antitrust investigations into tech giants like Google and Apple Inc. that began under former President Donald Trump.

In November, Google urged the Justice Department to review whether Kanter should be recused from all actions involving the company because of his past work representing its critics.

No decision has been made in the nearly six months since Kanter started the job on Nov. 16, while the department continues to waver over whether his involvement represents a conflict of interest, one of the people said.

The department sued Google in October 2020 for allegedly abusing its dominance of the online search market in the most significant antitrust case against an American company in two decades. It’s also preparing a second monopoly lawsuit over the company’s digital advertising business, Bloomberg has reported.

In private practice, Kanter represented News Corp., Yelp Inc. and Microsoft Corp., among others, who offered evidence to Justice Department antitrust officials that the companies said showed how Google’s conduct harmed their business.

Federal ethics rules require an official “to avoid an appearance of loss of impartiality in the performance of his official duties.” But those conflicts, as well as a separate ethics pledge by the White House, can be waived on a case-by-case basis. Solicitor General Elizabeth Prelogar, for example, was granted a waiver to participate in a Supreme Court case regarding Harvard University’s admission despite having been a lecturer at Harvard Law School.

Associate Attorney General Vanita Gupta, Kanter’s boss, will decide on whether or not he should be recused from the Google cases, two of the people said. Gupta herself received a waiver to oversee civil rights cases despite having lobbied both Congress and the Justice Department on behalf of the Leadership Conference on Civil and Human Rights.

In the meantime, Kanter’s top deputy, Doha Mekki is acting as the decision maker on both the Google lawsuit and the active investigation, two people familiar with the issue said.

Mekki, a seven-year veteran of the antitrust division, has already stepped into the deciding role in other cases where Kanter is recused, such as the agency’s challenge of UnitedHealth Group Inc.’s proposed $7.8 billion purchase of Change Healthcare Inc. and antitrust litigation between Apple Inc. and Epic Games Inc. Kanter represented rival health insurer Cigna Corp. and a yoga app whose executive testified in the Apple-Epic case before he became the top U.S. antitrust official.

The Justice Department’s antitrust suit against Google is slated for trial in September 2023. The department has asked Judge Amit Mehta in Washington to sanction Google for improperly shielding sensitive business documents from regulators through an overly broad reading of attorney-client privilege. Google denies any wrongdoing. Both sides are to finish interviewing executives and gathering documents later this month.

Kanter’s possible recusal has been a hot-button issue that’s straining relationships between the Biden administration and progressive Democrats, who advocate for aggressive action against the technology companies.

In January, Representative Pramila Jayapal, a Washington State Democrat, and Senator Elizabeth Warren, a Massachusetts Democrat, criticized Google for what they called the company’s attempts to bully Kanter into recusal.

Meta Platforms Inc. used similar conflict of interest arguments seeking to recuse Federal Trade Commission Chair Lina Khan, but a judge dismissed those in a January opinion. “It is natural that the president will select a candidate based on her past experiences and views, including on topics that are likely to come before the commission during her tenure, and how that administrator will implement the administration’s priorities,” Judge James Boasberg said.

Kanter “was a consistent proponent of vigorous antitrust enforcement in the private sector,” said Jeff Hauser, founder of the Revolving Door Project, an advocacy group. “In that world, it’s not problematic to be on the same side. The Biden administration found in Kanter somebody with a proven track record taking a set of concerns seriously that the administration wanted to take seriously.”