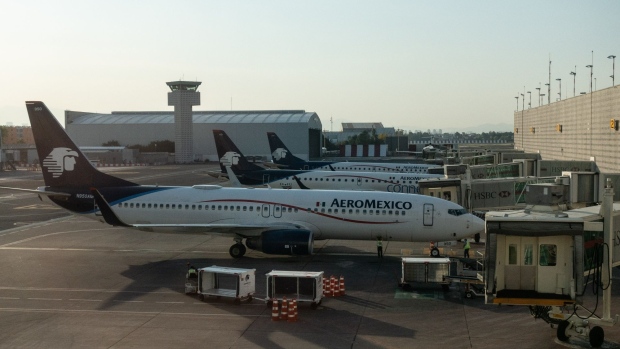 (Bloomberg) -- Apollo Global Management Inc. won court approval to provide a $1 billion bankruptcy loan for Grupo Aeromexico SAB, paving the way for the airline to proceed with its restructuring plans.

The decision resolves a clash between Apollo and a group of bondholders while bolstering Aeromexico’s efforts to weather an unprecedented collapse in air travel. The disagreement had prompted a bankruptcy court in New York to delay a key hearing on the debtor-in-possession financing four times.

Under the new pact, the minority lenders will be able to decide whether they want to convert their loans into equity, Timothy Graulich, a lawyer for Aeromexico, said Friday at the hearing. As the majority lender, Apollo will also be able to convert.

Aeromexico, which unlike U.S. airlines hasn’t received government aid to help it through the coronavirus pandemic, filed for court protection three months ago as demand for flights tumbled. The airline’s passenger totals are still less than half their year-ago levels, with customers on lucrative international flights down 84% last month.

The shares jumped on the news, advancing as much as 4.7% during the session before ending with a 1.6% gain to 4.51 pesos at the close in Mexico City. Aeromexico has fallen 71% this year, compared with the 12% decline of the benchmark Mexican stock gauge.

The $1 billion rescue plan for the struggling airline is divided into two tranches. Of the first, $100 million has already been doled out. Aeromexico can access the remaining $100 million of that tranche thanks to the approval of the financing plan and $175 million of the second tranche once certain conditions are met, according to a company statement.

Pending other conditions, Aeromexico will be able to access additional disbursements for a minimum of $100 million, until it reaches the $1 billion total.

Other big airlines in Latin America are also restructuring. Latam Airlines Group SA, the region’s largest carrier, moved to modify its $2.45 billion bankruptcy loan package last month after a judge blocked its plan to repay some of the borrowing with new stock instead of cash. The plan won court approval Sept. 18 after Santiago-based Latam added new lenders and removed the repayment feature.

(Updates with details of financing plan in third paragraph.)