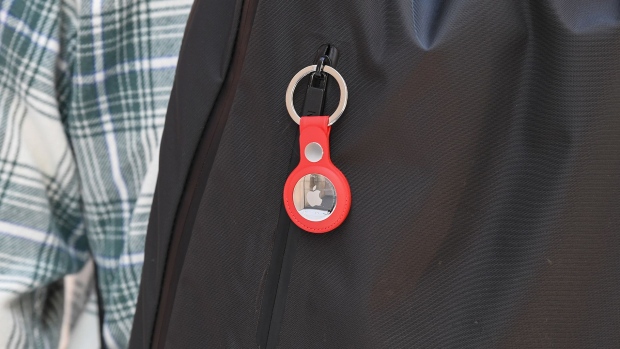 (Bloomberg) -- Apple Inc. is increasing the privacy of its AirTag tracking devices after several people in recent months reported that the product was used to stalk them.

The AirTag, introduced in April 2021, has wireless sensors and can connect to surrounding Apple devices to pinpoint the location of an attached item, such as keys or a purse. But in some cases, they’ve been used to track people or cars without consent. The company said Thursday that it’s working with law enforcement to address those concerns.

The company also said it has received reports of users getting notifications that someone could be tracking them with an AirTag or another Apple device -- only for the tracker to actually be a family member’s AirPods nearby.

“We’ve become aware that individuals can receive unwanted tracking alerts for benign reasons, such as when borrowing someone’s keys with an AirTag attached, or when traveling in a car with a family member’s AirPods left inside,” Apple said. “We also have seen reports of bad actors attempting to misuse AirTag for malicious or criminal purposes.”

The company warned perpetrators that each AirTag has a unique identifier that could be used to find them. Apple said it has provided such information to law enforcement and that those efforts have traced an AirTag back to a suspect who was caught and charged.

In response to the stalking concerns, Apple is adding a warning to the iPhone when a user sets up an AirTag that the device is meant to track items, not people without consent. And it will fix issues with notifications that have falsely alarmed users and post new material on its website to discourage people from misusing the $29 accessory.

Apple also is working on a new feature called Precision Finding that will let iPhone users find an AirTag that may be used to stalk them. The company will play a sound on a customer’s iPhone to let them know about a possibly unwanted AirTag nearby and enhance its system so it can send alerts more quickly. It will also improve sound on the AirTag so the notifications can be more easily heard.