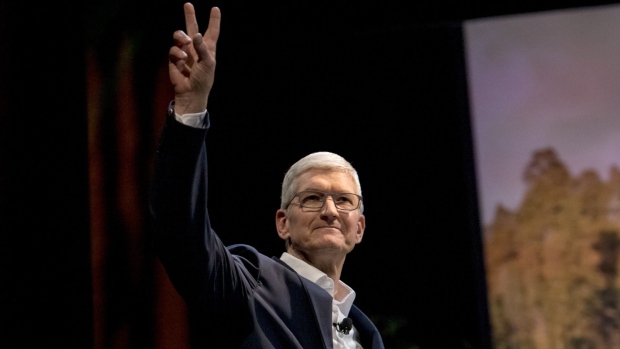 Tim Cook, chief executive officer of Apple Inc., gestures to attendees while arriving on stage during a keynote at the 2019 DreamForce conference in San Francisco, California, U.S., on Tuesday, Nov. 19, 2019. Salesforce.com Inc.’s annual software conference, where it introduces new products and discusses its commitment to social causes, was interrupted for the second year in a row by protests against the company’s work with the U.S. government. Photographer: David Paul Morris/Bloomberg , Bloomberg

Apple Inc. Chief Executive Officer Tim Cook wrote an open letter on racism, highlighting that his company must do more.

The full text of the letter was posted to the iPhone maker’s website.

“To create change, we have to reexamine our own views and actions in light of a pain that is deeply felt but too often ignored,” Cook said. “Issues of human dignity will not abide standing on the sidelines. To the Black community -- we see you. You matter and your lives matter.”

Cook said Apple would “commit to continuing our work to bring critical resources and technology to underserved school systems,” as well as “fight the forces of environmental injustice -- like climate change -- which disproportionately harm Black communities and other communities of color.”

Earlier this week, Cook said in an internal memo to employees that protections for people are “still not universally applied” as he discussed discrimination and inequality in the U.S.

Cook made the comments after the killing of George Floyd in Minneapolis that sparked protests and riots across the U.S., later extending to the U.K. and other countries.