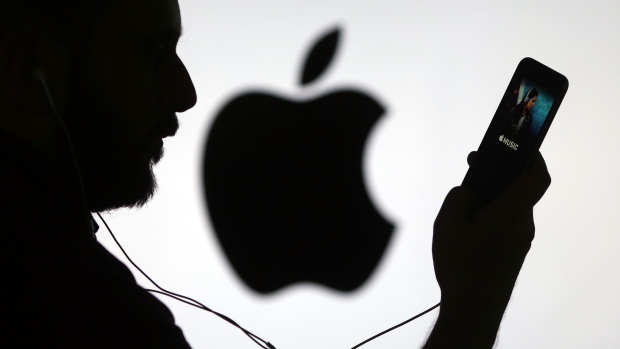 A man checks the Apple Music streaming site using his Apple Inc. iPhone 6s as he stands framed against a wall bearing the Apple logo in this arranged photograph in London, U.K., on Wednesday, Dec. 23, 2015. , Chris Ratcliffe/Bloomberg

Apple Inc., Spotify Technology Inc. and YouTube joined #BlackoutTuesday, an initiative tied to the music industry’s #TheShowMustBePaused movement, which supports protests across the U.S. against police brutality and racism toward African Americans.

The iPhone maker paused the browse feature on its Apple Music service, presenting users with a message about standing in solidarity “with the Black voices that define music, creativity, and culture.” The feature sends listeners to its “Beats 1” radio program playing motivational songs such as “The People” by Hip-Hop artist Common, and “Sue Me” by rapper Wale featuring gospel singer Kelly Price.

Spotify created a “Black Lives Matter” playlist with songs including Public Enemy’s “Fight The Power” and “FDT” by California rapper Y.G., which speaks out against U.S. President Donald Trump. The music division of Google’s YouTube canceled all meetings on Tuesday. Executives for YouTube’s business and music teams also invited staff to take the day off.

While artists such as Kehlani and Lil Nas X griped about the initiative’s execution as the industry shouldn’t need a special day to think about the importance of the black community and its contributions, the freed up time may help focus attention on these issues. Record labels led by white executives have relied on or imitated black art for decades, an uneasy relationship that Prince compared to that of the master and slave.

Images of black squares flooded social media as influencers, celebrities, artists and musicians tried to raise awareness and address racial tensions that have plagued the fabric of American society.