Apple Inc. shares gained the most since 2020 after quarterly results sailed past Wall Street estimates, marking a victory against a supply-chain crunch fueled by the pandemic and chip shortages.

Sales climbed 11 per cent to a record US$123.9 billion in the fiscal first quarter, the company said Thursday. Analysts had predicted US$119.1 billion on average. Profit also beat projections, and the company predicted that sales would grow by a double-digit percentage in the March quarter.

The stock rallied 7 per cent to US$170.33 Friday on the news, marking the biggest one-day increase since July 31, 2020, which followed another blockbuster quarter.

The surprisingly strong results from Apple suggest that fears of supply upheaval were overblown. Apple Chief Executive Officer Tim Cook had warned late last year that shortages could cost the company more than US$6 billion in sales during the all-important holiday period. But the tech giant navigated the crisis and benefited from a flood of new products, including the iPhone 13, Apple Watch Series 7 and updated Macs.

However, Apple may be an early outlier in resolving supply chain issues, thanks in part to its dominant position in obtaining parts from suppliers. A resurgence of COVID 19, skyrocketing shipping costs and labor shortages continue to strain the global supply chain.

STMicroelectronics NV, which counts Apple as a major customer, said Friday it doesn’t see a letup in the chip shortage before 2023. The Biden administration has also stated that the global semiconductor shortage will persist until at least the second half of this year.

Wall Street was broadly happy with Apple’s results and its ability to navigate the supply chain crisis while also introducing a flood of new products.

The earnings report “highlights the strength, and stickiness, of Apple’s ecosystem,” Morgan Stanley’s Katy Huberty said in a note to clients. She reiterated Apple as her top pick for 2022.

Before Apple’s results were released Thursday afternoon, its shares had fallen 10 per cent this year, hurt by a broader downturn. The stock gained 34 per cent in 2021.

Investors have been looking to Apple for reassurance after a recent rout battered technology stocks. Concerns about a sales slowdown and looming interest rates hikes have made the sector less appealing in the past month, with Apple itself suffering from the retreat. After topping a market value of US$3 trillion in early January, Apple is now worth less than US$2.8 trillion.

Earnings for the Cupertino, California-based company rose to US$2.10 a share in the first quarter, which ended Dec. 25, well above the US$1.90 estimated by analysts.

On a conference call, Apple executives said supply-chain constraints would ease further in the March quarter, through its rate of growth would decelerate for both the overall business and the services segment. Apple didn’t give a specific sales target, beyond saying it would be a record for the period. Analysts are predicting that revenue will top US$90 billion. Gross margin will be 42.5 per cent to 43.5 per cent, Apple said.

The company also said there are now 1.8 billion Apple devices currently in use, up 300 million from two years ago. And it has 785 million paid Apple and third-party subscriptions on its platform, up from 745 million reported in the previous quarter.

The company generated US$71.6 billion in revenue from its flagship product, the iPhone, beating Wall Street estimates of US$67.7 billion. That’s up 9.2 per cent from the year-ago quarter. The sales period represented the first full quarter of iPhone 13 revenue. On the company’s earnings call, Cook said the entire iPhone 13 line contributed to the strong growth and declined to specify if the Pro models were stronger performers than the cheaper versions.

The phone went on sale in September, several weeks earlier than the iPhone 12 did in 2020. Though the iPhone 13 was considered to be a modest update, users looking to upgrade to 5G service still clamored for the device.

The supply constraints hitting the iPhone 13 line and other new products, including the latest Macs and Apple Watches, resulted in shipment delays of several weeks. In Apple’s previous earnings report, the company said that the problems cost it US$6 billion in sales -- and warned that the holiday quarter would be even worse. 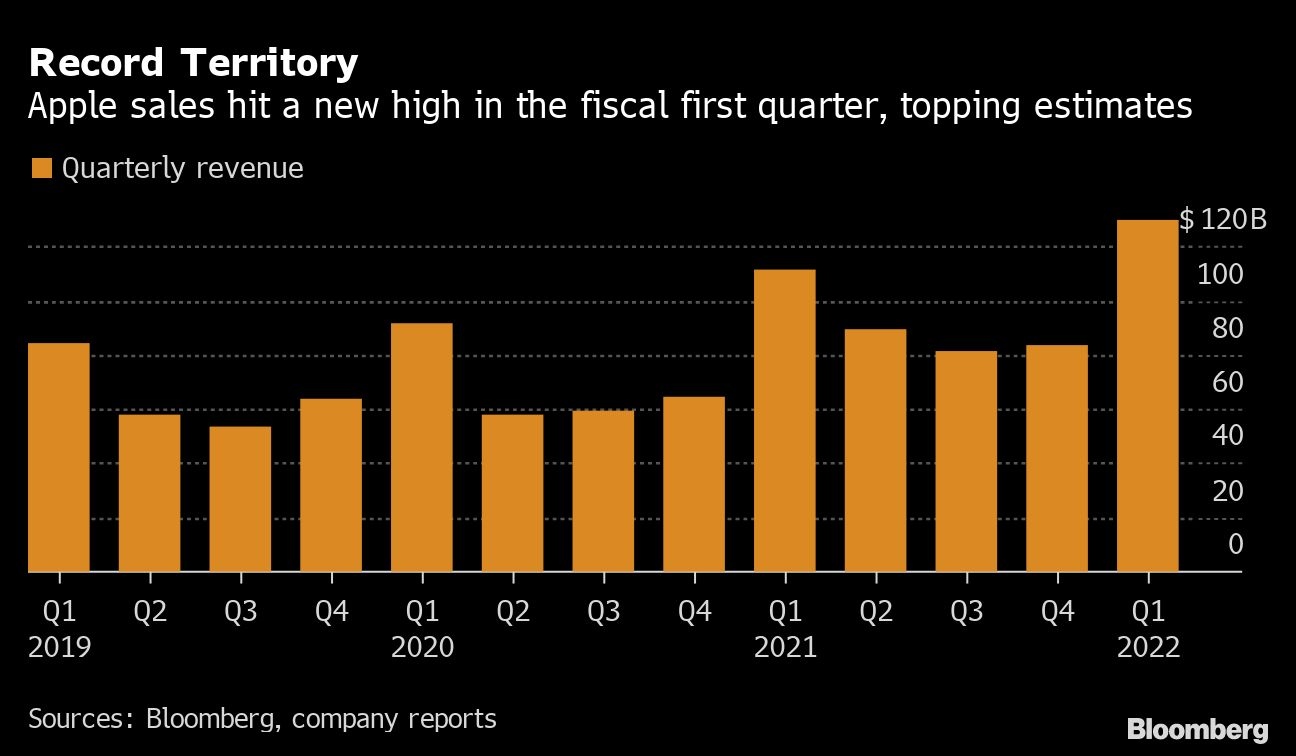 Against that backdrop, the results were a relief to investors. But not everything was rosy: Sales of the iPad were lower than projected. The company had said after its previous quarter that supply problems were hitting that product particularly hard. Japan also was a weak spot last quarter.

The iPad brought in US$7.25 billion in the first quarter, compared with an estimate of US$8.1 billion. The company launched the most significant iPad mini update in the product’s history and a minor refresh to its cheapest tablet during the quarter, but struggled to get enough supply to market. Chief Financial Officer Luca Maestri said that iPad shortages in the quarter were “pronounced,” and Cook said some of constraints were due to Apple reallocating key components to the iPhone.

“This is our eighth quarter reporting results in the shadow of the pandemic,” Cook said, “and while I can’t say it gets any easier, I can say I’m incredibly proud of the way our teams have come together.”

Apple generated US$19.5 billion in services revenue in the first quarter, topping Wall Street expectations of US$18.6 billion. The category grew 24 per cent from a year earlier on strong App Store, Apple Music and iCloud subscription sales. Apple said earlier this month that developers generated about US$60 billion from the App Store during 2021, but it didn’t share specific App Store revenue for the company.

The wearables, home and accessories division -- a unit that includes the Apple Watch, Apple TV, AirPods, Beats headphones, the HomePod and other items -- produced US$14.7 billion during the quarter. That was up 13 per cent from a year earlier and above the average estimate of US$14.2 billion. The category got a boost from new AirPods earbuds launching near the end of 2021 after not getting a similar upgrade in 2020. The Apple Watch Series 7, however, faced a release delay and significant shortages.

The company also reported about US$10.9 billion in Mac sales, beating the estimate of US$9.5 billion. That climbed 25 per cent from the year-ago period. Apple launched a new MacBook Pro during the quarter that was well received by consumers and reviewers. Maestri said the majority of new Macs sold now have Apple-designed chips, rather than parts from Intel Corp.

The coming year could be even bigger in terms of new products. Apple is planning its widest array of launches ever, including a new iPhone SE and an iPad Air with 5G as early as this spring, Bloomberg has reported. There also could be updated Apple Watches, four new iPhones and multiple Macs coming in the fall.

On the call, Cook was asked his opinion of the so-called metaverse -- a concept promoted by Facebook owner Meta Platforms Inc. and other rivals. Cook responded that Apple is investing heavily in augmented reality and noted that AR apps are already available on the iPhone. The company plans to launch a mixed augmented and virtual reality headset next year, Bloomberg has reported.

“We see a lot of potential in this space and are investing accordingly,” he said.