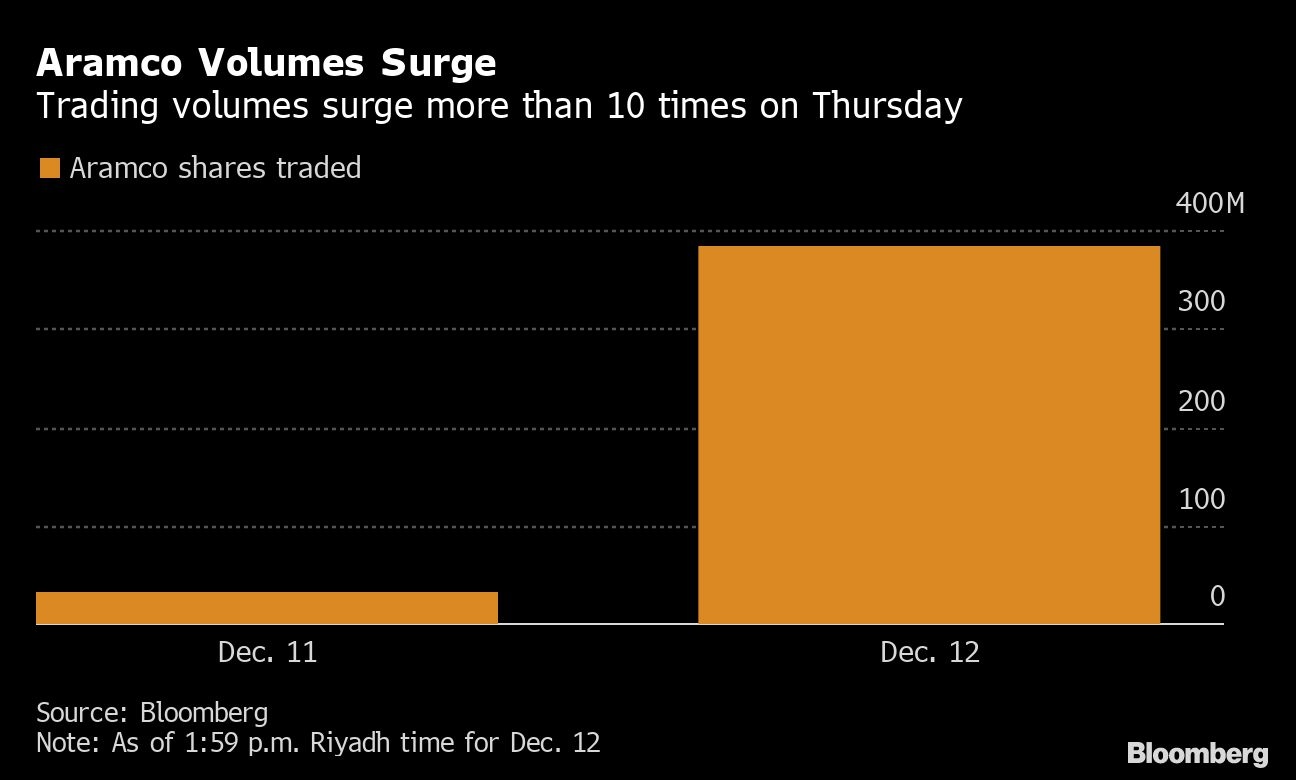 The surge reflects the kingdom’s efforts to engineer a successful start to trading after international investors balked at the price: Saudia Arabia encouraged local individuals to buy and hold the stock through cheap loans and a bonus-share plan, while pushing wealthy families and regional allies to buy as well. The offering consisted of only 1.5 per cent of Aramco’s stock, so that investors who didn’t get allocated shares in the IPO had to buy in the secondary market.

Aramco raised US$25.6 billion in the deal, selling shares at 32 riyals each and overtaking Microsoft Corp. and Apple Inc. as the most valuable listed company.

The IPO has become synonymous with Saudi Arabia’s controversial Crown Prince Mohammed bin Salman and his efforts to reshape the economy of the world’s biggest oil exporter. But his insistence on the US$2 trillion valuation deterred international investors, many of whom said the stock was too expensive given governance and geopolitical concerns.

Analysts at Sanford C. Bernstein & Co. said after the first trading day it’s already time to cash out. In a Bloomberg survey last month, global money managers put Aramco’s fair value at between US$1.2 trillion and US$1.5 trillion.

While hitting the target may vindicate Saudi officials, it could complicate any plans to sell part of Aramco’s shares abroad as originally envisaged by Prince Mohammed in 2016, when he said a dual listing could raise as much as US$100 billion. Saudi officials met in recent weeks with international investors to sound them out on a possible listing of Aramco’s shares in Asia, the Wall Street Journal reported Wednesday.

Still, the IPO, touted as part of a blueprint for life after oil for the kingdom is a watershed moment for a business that’s bankrolled Saudi Arabia and its rulers for decades.

The debut was cheered by Saudi and Gulf investors, who see the stock price supported by Aramco’s guaranteed dividends, buying by index-tracking funds and the fact that the region doesn’t have any other listed major oil companies.

Aramco’s US“$2 trillion valuation is justified due to secured dividend streams,” Arqaam Capital analysts including Rita Guindy and Jaap Meijer wrote in a report on Wednesday in which they initiated coverage with a buy recommendation and price target of 39.20 riyals.

Arqaam expects a gradual increase of two per cent annually in the dividend, potentially being topped up by a special payout of US$20 billion in the next three years.