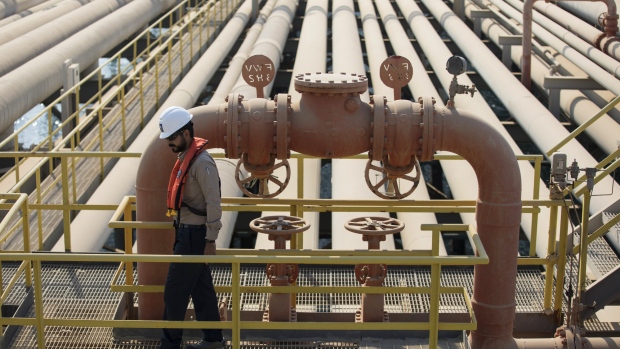 An employee inspects pipes used for landing and unloading crude and refined oil at the North Pier Terminal, operated by Saudi Aramco, in Ras Tanura, Saudi Arabia, on Monday, Oct. 1, 2018. Saudi Aramco aims to become a global refiner and chemical maker, seeking to profit from parts of the oil industry where demand is growing the fastest while also underpinning the kingdom’s economic diversification. , Dana Khraiche

Now that Saudi Aramco has revealed itself as the world’s most profitable company, it’s preparing to host its first earnings call in August to discuss half-yearly results.

The world’s biggest crude exporter rolled back decades of secrecy over its business when it revealed an independent audit of its oil reserves in January and in April released a bond prospectus revealing financials for the first time, showing a $111 billion profit last year.

Now the company, officially known as Saudi Arabian Oil Co., is going a step further by posting results for 2017 and 2018 on a new investor relations page on its website. Holding a public conference call to discuss half-year earnings, as indicated on the investors’ page, would be another first.

Aramco is a linchpin in the plan by Crown Prince Mohammed bin Salman to overhaul the Saudi economy by developing new industries and bringing in foreign investors to fuel growth. While royalties and taxes from Aramco’s billions of profit underpin the economy already, the oil producer is bringing in cash by selling $12 billion of bonds in its first international dollar issue and by attracting firms like Schlumberger Ltd. and McDermott International Inc. to invest in manufacturing in the Persian Gulf state.

The crown prince has also mooted an initial public offering of Aramco that he says would value the company at around $2 trillion. Energy Minister and Aramco Chairman Khalid Al-Falih has said the IPO is on track for 2021 and that the company’s bond was "only the beginning" of its involvement in capital markets.

Aramco executives including Chief Executive Officer Amin Nasser and Khalid Al-Dabbagh, the senior vice president for finance, briefed investors privately ahead of the bond sale and succeeded in garnering requests for more than $100 billion in securities.

To contact the reporter on this story: Anthony DiPaola in Dubai at adipaola@bloomberg.net

To contact the editors responsible for this story: Nayla Razzouk at nrazzouk2@bloomberg.net, Helen Robertson