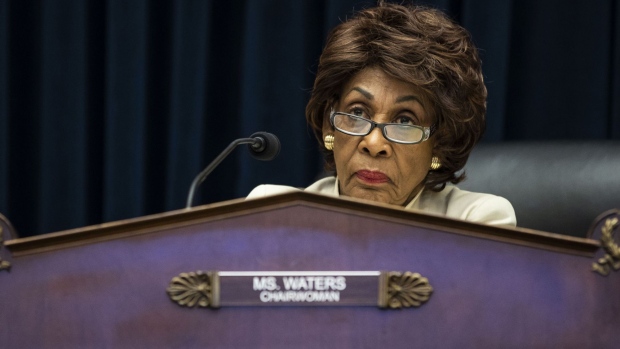 (Bloomberg) -- A push by Democrats to tighten market rules in response to the implosion of Archegos Capital Management and this year’s meme-stock mania is gaining traction in the U.S. House.

The Financial Services Committee, led by Representative Maxine Waters of California, may hold votes as soon as next week on legislation that could have broad consequences for hedge funds, online brokers and powerful trading firms, said people familiar with her plans.

Lawmakers are considering imposing federal oversight on large family offices like Archegos and banning the controversial practice of market makers such as Citadel Securities paying Robinhood Markets and other brokerages to execute investors’ trades, a confidential note recently sent to Democratic members of the panel shows. There are more than a dozen proposals under review and not all are expected to be taken up by Waters’s committee at this time, said the people who asked not to be named in discussing private negotiations.

Approval by the financial services panel is only the first step in a process that includes getting the backing of the full House and a closely divided Senate. But even if the bills ultimately fail, the effort is intended to send a message to regulators, the people said. Securities and Exchange Commission Chair Gary Gensler has already said his agency is weighing a number of rule changes after the market disruptions.

The committee released drafts of the bills earlier this year in conjunction with several hearings it held on the wild trading of GameStop Corp. and companies that have surged despite lackluster financial results. The memo shared with Democrats indicated that final versions are still being debated.

Waters’s office didn’t respond to a request for comment.

Some of the potential legislation is expected to draw significant industry opposition. That includes Waters’s Capital Markets Engagement and Transparency Act, which would require hedge funds to publicly disclose their bets against stocks, as well as derivatives holdings that firms have used to conceal their stakes. It also calls for speeding up the timing of the reports to the SEC -- currently done quarterly -- to monthly.

Another measure championed by Representative Alexandria Ocasio-Cortez, a New York Democrat, could require family offices to register with the SEC as investment advisers unless they oversee less than $750 million. Bill Hwang’s Archegos took advantage of the current regulatory exemption to largely shield itself from government scrutiny.

Several of the bills would revamp market regulation in the wake of the GameStop run up, which was fueled by small investors using Robinhood’s mobile phone app. One orders an SEC study of “gamification” -- the use of video-game-like prompts that can boost trading.

Read More: Robinhood, Meme Stocks and Investing as a Game

On payment for order flow, where trading firms pay brokers to handle their retail customers’ orders, the note sent to lawmakers says the committee is considering a scaled-back version that directs the SEC to study the issue before crafting rules. Another proposal would prohibit market makers from trading ahead of retail stock orders, with top managers being held personally liable for any violations.

One bill being considered would require brokers to add additional safeguards for small investors that trade options, a measure that comes after the suicide of a 20-year-old Robinhood client who mistakenly thought he had lost more than $700,000.