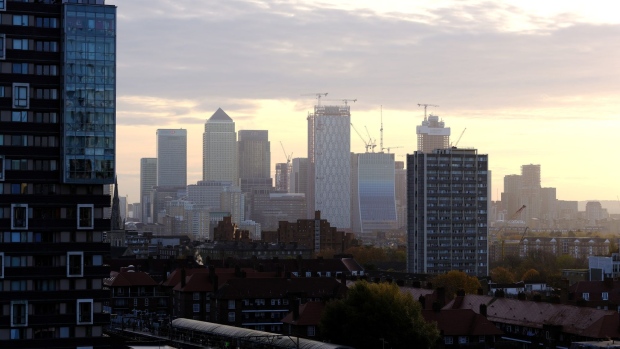 Skyscrapers in the Canary Wharf business, financial and shopping district, centre, including One Canada Square dominate the skyline above residential buildings in London, U.K., on Wednesday, Nov. 14, 2018. The City of London averted one disaster with the draft Brexit deal announced Wednesday, but the bottom line is that banks, brokers and asset managers will continue to prepare for the talks going off the rails. Photographer: Bryn Colton/Bloomberg , Bloomberg

(Bloomberg) -- With Britain on the verge of quitting the European Union, global investment banks are stepping up lobbying efforts to maintain easy access to the bloc’s lucrative market.

The Association for Financial Markets in Europe, one of the industry’s top advocacy organizations, launched a new bid on Tuesday to convince policy makers in Brussels that they should revamp their approach to awarding foreign-based firms access to clients in the EU. Without revision, the EU’s rules could damage business and even threaten financial stability, the group said.

At issue is the EU’s so-called equivalence process, which allows firms to do business in the bloc if regulations in their home country are deemed tough enough. After failing to convince the EU to maintain easy market access through so-called passporting, London’s financial hub still seeks to widen and refine the equivalence regime that EU policy makers have insisted on.

“For EU capital markets to thrive, alongside developing the EU financial ecosystem, it is important to maintain and continue to develop open capital markets,” AFME executives led by Oliver Moullin, its managing director for Brexit issues, said in a paper calling for improvements to the equivalence framework.

AFME said the EU should update the equivalence system to cover more types of banking services, such as those regarding securitization markets and the system for settling trades.

The lobby group also called for increased cooperation between regulators in the EU and foreign countries, as well as more clarity about how the EU would navigate a scenario where it withdraws a country’s equivalent status, potentially roiling cross-border trading and markets.

Wall Street and other non-European banks have used London as their primary base to access EU markets for decades. In the year to March 31, 2019, the financial sector contributed more than 75 billion pounds ($97 billion) to U.K. public finances, or about 10.5% of all tax receipts, according to estimates published by PwC and the City of London Corporation this month. The sector employs about 1 million people.

To contact the reporter on this story: Silla Brush in London at sbrush@bloomberg.net

To contact the editors responsible for this story: Ambereen Choudhury at achoudhury@bloomberg.net, Keith Campbell