Russia is getting higher prices for its oil as strong demand in Asia undermines western powers’ efforts to curb revenues to Moscow’s war machine.

The Group of Seven leaders agreed on Tuesday that they want ministers to urgently evaluate how the price of Russian oil can be curbed to limit the energy proceeds that the Kremlin uses to finance its conflict in Ukraine. The main idea floated over the past few weeks has been some kind of cap.

But Russian government data show that the actual price of the nation’s flagship Urals grade has appreciated relative to the international benchmark Brent. It’s a reminder that underlying demand -- mostly from countries that would have to enforce any price cap -- has held up. 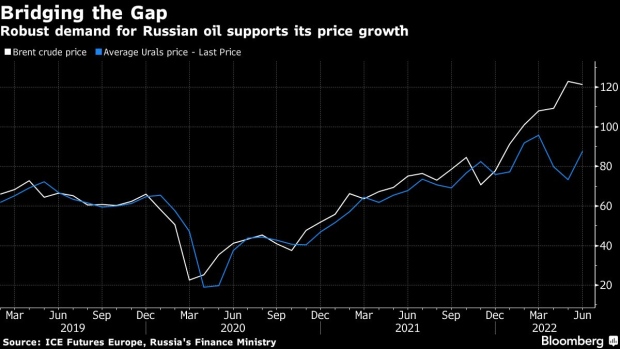 The Urals price averaged US$87.49 a barrel between mid-May and mid-June, jumping nearly 20 per cent compared to the corresponding month-earlier period, according to the nation’s Finance Ministry.

While Urals is still well below Brent, the gap between the two has narrowed sharply, the data show. The average price of Russia’s key export blend is based on assessments by Argus Media Ltd.

However, a stronger focus on Asian buying, and the emergence of smaller trading houses willing to deal with Russia, has helped to maintain flows.

In the first 13 days of June, oil exports via pipelines and Russian port facilities operated by state-run Transneft PJSC averaged 4.62 million barrels per day, according to Bloomberg calculations.

That’s only marginally below the average a month before, the calculations based on data from Russian Energy Ministry’s CDU-TEK unit show.