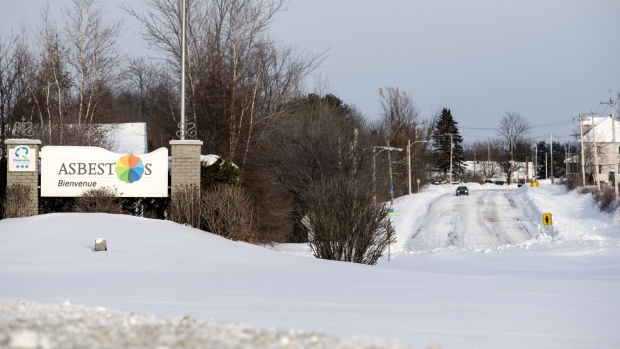 (Bloomberg) -- The town of Asbestos, Quebec, used geography, history and a touch of poetry to offer new name options to its residents after its earlier proposals were derided.

The six monikers were announced Friday by Mayor Hugues Grimard, who’s led the push to abandon a name associated with cancer in English. Negative reactions to choices that included a species of turtle sent the local council back to the drawing board two weeks ago.

“We think that can be more inclusive,” Grimard told local radio station CJAN about the new names. “We’re convinced we are taking the best decision for the future.”

Only two of the initial names survived the process -- Phénix, the mythical bird reborn from its ashes, and Trois-Lacs, a neighborhood of Asbestos that means “three lakes” in English.

A proposal to call the town Jeffrey, after the first entrepreneur who mined the deadly mineral, was amended to Jeffrey-sur-le-Lac (Jeffrey-on-the-Lake), a nod to the turquoise blue water that now fills the mine’s open pit.

The color blue is also central to another option, L’Azur-des-Cantons, alluding both to a local lake and to the mine’s reservoir, “which doesn’t fail to amaze those who discover it,” the council noted on its website. Val-des-Sources (Valley of Springs) is described as “the fusion of our landscape and our roots.” The accent is both on water, and on “the symbol of what we have the ambition to become.”

The sixth choice is Larochelle with “roche” -- or rock in English -- meant to connect the present to the town’s mining past. The ending sounds like “aile”, or wing in English, “which symbolizes our town’s flight to a prosperous and promising future.”

Residents over the age of 14 will vote October 14-18. In a nod to the rapidly cooling weather and worsening Covid-19 crisis, people will be able to vote from their car, Grimard said.

Early reactions on Facebook were generally more positive than they’ve been in the past and supportive of the council’s efforts. Val-des-Sources appeared to have the most fans.

“What an evolution!” one wrote. “Bravo!! Now all that remains is to vote!”