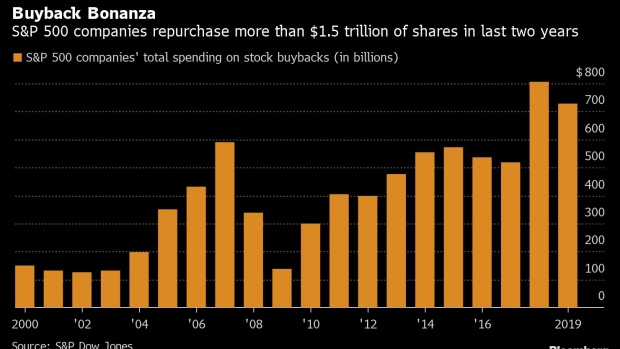 Asian tycoons are gung-ho on share buybacks at a time when industry leaders in the U.S. and Europe are holding back because of the coronavirus outbreak.

The two are not alone. A gamut of companies across Asia have recently either bought back their shares or announced fresh buybacks in the belief that their stock has become undervalued amid a market rout that has evoked painful memories of the global financial crisis.

“Those doing buybacks are signaling they have healthy balance sheets and are confident enough to weather this downturn,” said Joel Ng, an analyst at KGI Securities (Singapore) Pte. Asian companies are “seeing value in their current share prices,” he added.

According to Ng, many Asian companies are in a much stronger financial position than their peers abroad. While many U.S. and European companies had been accumulating debt, “Asian companies have been deleveraging and building up their cash war chests,” he said.

S&P Dow Jones Indices expects that S&P 500 buybacks this year may be significantly lower than the pre-virus estimates that projected this year’s purchases to come close to or to top the $806 billion record set in 2018.

While a commitment to buy back shares during economic turmoil has its risks, more Asian companies may follow the example of SoftBank, which could be biggest contributor to the region’s repurchasing tally this quarter.

“Asia has a lot of founder-driven companies, which will continue to buy stocks on excessive falls,” said Aneesh Srivastava, chief investment officer at Star Health and Allied Insurance Co. “The companies are their own babies.”