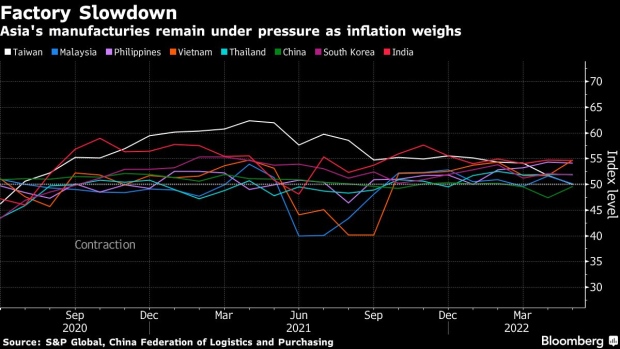 Employees work on the production line manufacturing Continuous Variable Valve Duration (CVVD) actuator motor for vehicles during a media tour at the Samhyun Co. factory in Changwon, South Korea, on Wednesday, June 22, 2022. The tour was organized by the Ministry of Small and Medium-sized Enterprise (SMEs) and Startups. , Bloomberg

Purchasing managers’ indexes across the region eased in June, with South Korea, Thailand and India among those showing the biggest declines, according to S&P Global. Taiwan slipped below 50, the dividing line between expansion and contraction, for the first time in two years. Malaysia was a rare gainer, moving up to 50.4 from 50.1 in May, and Japan stayed at the 52.7 level seen in the prior month.

Central bankers in Asia for a while pointed to the supply-side nature of price growth in the trade-heavy economies, but are increasingly having to confront the global inflationary pressure with at least modest rate hikes to protect currencies. That adds another wrinkle to fragile growth recoveries, on top of lingering supply-chain tangles and pandemic-related interruptions that have put economies worldwide on the brink of recession.

The latest reading for India at 53.9 marks the weakest pace of growth since last September, reflecting softer increases in production, factory orders, stocks of purchases and employment, according to S&P Global.

China bucked the trend, with data released Thursday showing the economy is healing as Covid-related mobility restrictions were lifted. The official manufacturing purchasing managers index rose to 50.2 from 49.6 in May, the National Bureau of Statistics reported -- slightly below the median estimate of 50.5 in a Bloomberg survey of economists. It was the first time since February that the index was above 50.

In another sign that the world’s No. 2 economy could help lift regional growth, China’s non-manufacturing gauge, which measures activity in the construction and services sectors, climbed to 54.7, the highest in more than a year and well above the consensus forecast of 50.5. A separate survey focused on smaller companies in China Friday showed that manufacturing recovered stronger than expected in June.

The outlook remains clouded for the rest of Asia, largely due to supply snarls and rising commodities costs.

“Survey respondents often commented that material supply shortages and rising input prices had increasingly weighed on output and demand across the manufacturing sector,” according to the report on South Korea by Usamah Bhatti, an economist at S&P Global Market Intelligence. “As such, supply chain disruption was at its worst for six months, while a fresh acceleration in input price inflation pushed the rise in average cost burdens to one of the sharpest in the survey history.”

In export powerhouse Taiwan, inflation was less of a problem than a resurgent Covid-19 outbreak that disrupted factory operations and pushed production down at a quicker pace than in May, according to S&P’s report.

“Not only are firms facing the unpredictable nature of Covid-19 waves, but strong inflationary pressures globally, stretched supply chains and uncertainty over the Russia-Ukraine war,” Annabel Fiddes, economics associate director at S&P Global, said in the report on Taiwan.

(Updates with India PMI in the second paragraph.)