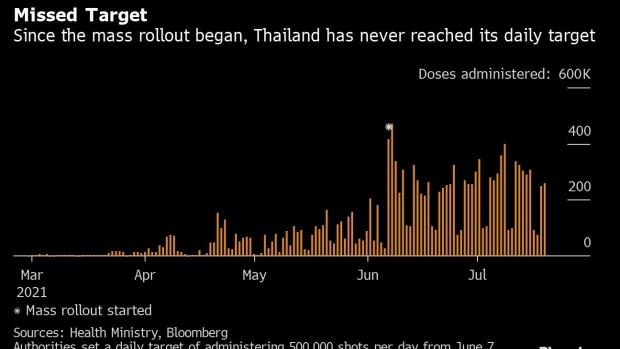 Healthcare workers administer doses of the AstraZeneca Covid-19 vaccine at a vaccination center set up at the Bang Sue Grand Station in Bangkok, Thailand, on Friday, July 16, 2021. Thailand reported a record one day tally of new covid cases as lockdown-like restrictions imposed in the nation's virus hotspots failed to stem a raging outbreak. , Bloomberg

AstraZeneca Plc is planning to import Covid-19 vaccines to Southeast Asia as its only manufacturing facility in the region struggles to ramp up output to meet demand from countries hit hard by the delta variant.

The Anglo-Swedish drugmaker is scouring more than 20 supply chains in its global manufacturing network to find additional vaccines for Southeast Asia, including Thailand, James Teague, managing director for AstraZeneca Thailand, said in an open letter Saturday. The company “will leave no stone unturned” in manufacturing vaccines as fast as possible, he said.

“A global supply crunch for Covid-19 vaccines and shortages of the materials and components required to produce the vaccine, make it difficult to provide certainty today, but we are hopeful of importing additional doses in the months ahead,” Teague said.

Southeast Asia is reeling from a resurgent Covid outbreak with the emergence of the more infectious delta variant, with Thailand and Indonesia setting record for new cases and deaths in recent weeks. Thailand reported 14,260 new cases and 119 fatalities Saturday, with more than 90% of the nation’s total infections coming during the third wave of the outbreak that began in early April.

AstraZeneca’s inability to scale up production has contributed to the slow vaccination rate in countries including Thailand, the Philippines and Vietnam, which are in line to receive shots made by its Thai partner Siam Bioscience Plc. Thailand has said it’s in talks to procure additional vaccines from companies including China’s Sinovac Biotech Ltd. to fill the supply gap.

Thailand may receive 5 million to 6 million doses of vaccine a month if AstraZeneca can ensure uninterrupted manufacturing, Teague said, as “the number of doses in each harvested batch is never completely certain, especially in the early stages of a new supply chain.” The company expects to deliver a total of 11.3 million doses to Thailand by end-July, he said.

Thailand, which ordered 61 million doses of Astra shots, expected 10 million jabs each a month to inoculate 70% of its population by the end of the year. The nation has administered 15.4 million vaccine doses so far, enough to cover a little more than 11% of the population, according to the Bloomberg Covid-19 Vaccine Tracker.

AstraZeneca planned to produce 180 million doses of its Covid vaccine this year through Siam Bioscience, a company linked to the Thai monarchy, with a target to export two-thirds of the output to countries in Southeast Asia.

While Thai officials have said they are weighing a temporary ban or restriction on Astra exports, Teague said “the vaccines made in Thailand are of critical importance to our neighbors as much as they are to us here.”