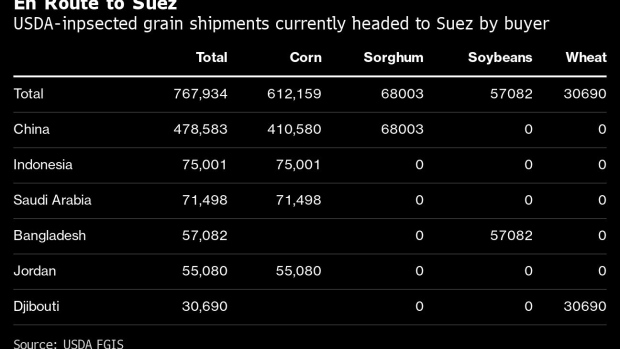 Corn sits in a grain truck during a harvest in Princeton, Illinois, U.S., on Tuesday, Sept. 29, 2020. December corn futures up 3.4% to $3.77 1/4 a bushel, on pace for the biggest gain for the contract since mid-August. Photographer: Daniel Acker/Bloomberg , Bloomberg

(Bloomberg) -- The congestion of the Suez Canal, caused by a stranded container ship, may delay nearly 7% of seaborne U.S. major grain shipments, according to USDA and vessel data analyzed by Bloomberg.

Since the Bellatrix left Zen-Noh’s grain export elevator on the Mississippi River in late February, just 12 of 184 bulk carriers and general cargo ships have opted to take the Suez route, as many vessels take the Panama Canal and Cape Route around South Africa to access Asia.

More than 80% of the impacted grain shipments are corn, with close to 60% of it on six vessels headed to China. At least one vessel, the Ledra, hauling corn to Vietnam, recently diverted toward the Cape Route around South Africa.