Aurora's write-downs are about 'cleaning up the past': Executive chairman

Aurora Cannabis Inc. warned Tuesday it expects to record a writedown of up to $1.8 billion in its fourth quarter, and announced it is promoting Miguel Martin, the company's head of U.S. operations, to the role of chief executive officer.

Aurora said in a statement that it expects to take a massive writedown between $1.6 billion to $1.8 billion of goodwill and intangible assets when it reports its fiscal fourth-quarter results on Sept. 22. The writedown includes an inventory charge of approximately $140 million and a $90 million asset writedown, Aurora said. Aurora previously wrote down $1 billion in assets earlier this year when it announced it would layoff 500 staff and close several facilities.

Aurora forecasts fourth-quarter revenue of between $70 million and $72 million, a slight decline from the $75.5 million it generated in the prior quarter. The company also said it ended its high-profile deal with the UFC to collaborate on several CBD products, and is expected to make a US$30-million payment to terminate the contract in its next fiscal quarter.

Aurora also restructured its credit facilities to provide the company with better flexibility during its current transformation plan, the company said.

The company's latest pursuit for profitability will be managed by Martin, who just joined Aurora in May after the company acquired his U.S. CBD distributor Reliva LLC. Martin will take helm of the troubled cannabis producer at a time when it has had to shut down several of its cultivation facilities, while laying off hundreds of staff and taking steep writedowns less than two years after Canada legalized recreational cannabis. 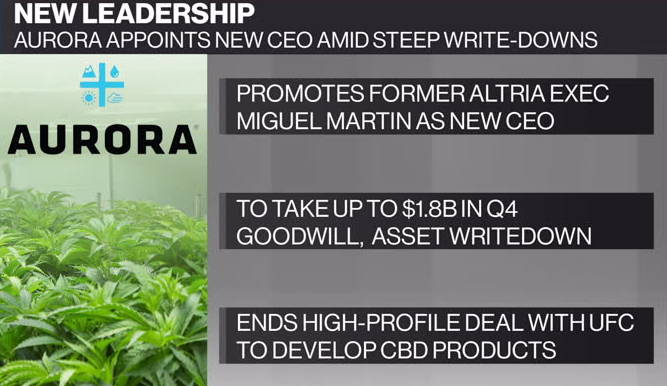 "I am excited to step into the role of CEO at this inflection point in Aurora's business," Martin said in a statement.

"In my early days, I have seen the tremendous potential of this organization firsthand – a combination of deep industry knowledge, commitment to quality, great brands and a passion for patients and consumers that is truly differentiated. I am confident that we have the infrastructure and capabilities for long-term success in the global cannabinoid industry.”

Singer added there's "very little competition" in the premium segment in Canada's recreational market, which could allow the company to shift some of its focus to sell things like pre-rolls and vape products.

"We're going to focus on high-margin categories and products that are going to drive profitability," Singer said.

MKM Partners executive director Bill Kirk said in a report on Tuesday that investors would have likely preferred to see Aurora detail its plan toward profitability after Martin has settled into his new role to better understand the company.

"Aurora wants to portray having a plan, but we are not sure a concrete action agenda has yet been developed," Kirk said in a report.

Singer described the amount of news on Tuesday as "tactical,” adding that Aurora plans to issue its long-term strategy to investors shortly.

"This is about cleaning up the past," Singer said. "We've set a solid foundation to deliver strong performance going forward."