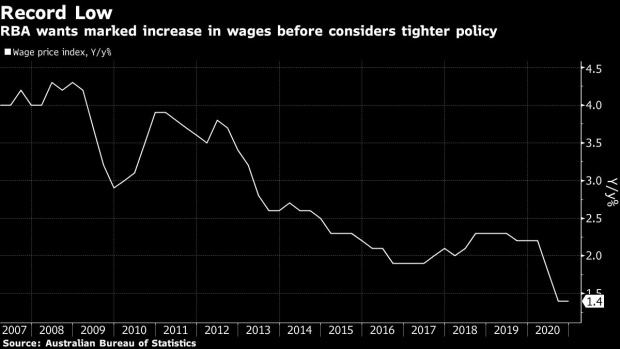 (Bloomberg) -- Discover what’s driving the global economy and what it means for policy makers, businesses, investors and you with The New Economy Daily. Sign up here

Australia’s central bank will maintain its highly supportive policy settings despite surging growth and falling unemployment, as it faces up to the even bigger challenge of lifting wages and inflation from record lows.

Reserve Bank of Australia Governor Philip Lowe is set to keep interest rates and the three-year yield target unchanged at 0.10% on Tuesday, while maintaining the current pace of longer-dated bond purchases under the quantitative easing program. He’s expected to defer a key decision on whether to rolls over the yield target maturity to November 2024 from April 2024.

The RBA also releases a quarterly update of forecasts Friday that are likely to see the growth outlook lifted and the unemployment estimate lowered. Despite those improvements, Ben Jarman at JPMorgan Chase & Co. said it is “very unlikely” wages will reach Lowe’s goal of growth above 3% by 2024.

Australia’s economy has recovered rapidly, bolstered by rising confidence from the early suppression of Covid-19 and record fiscal and monetary stimulus. The jobless rate fell to 5.6% in March, dropping significantly faster than the RBA expected only three months earlier. In contrast, first quarter consumer prices released last week showed annual core inflation eased to 1.1%, the weakest in the history of the series.

“The RBA ideally wants to generate a shock to expectations and pricing behavior from ‘outside the system’ to jump-start the economy into a regime of higher wage and price expectations,” said Jarman, a senior economist at JPMorgan in Sydney. “Staying dovish and running a hot labor market is the conventional approach to achieving such a regime shift.”

Lowe has made two adjustments to the policy framework that reinforce expectations stimulus will stay in place for some time yet.

The central bank is in the midst of a second A$100 billion ($78 billion) tranche of QE and is expected to move to a third tranche as it tries to keep a lid on any exchange rate appreciation. The RBA will likely attempt to trail any move by the Federal Reserve in order to avoid unwanted currency appreciation.

Yet there are potential problems emerging in the bank’s three-year yield target program. While the RBA has its thumb on the targeted bond line, there is a large gulf between the yield on this security and those maturing at slightly later dates. There’s also a widening gap to rates on derivatives linked to three-year yields that flow through into borrowing costs for companies and consumers.

“The size of the bond purchase program is likely to be affirmed, amid a potential reduction in issuance. An early shift in the three-year bond target to the November 2024 note remains a live risk.”

Australia’s economy is also being supported by a surge in the price of iron ore, which last week approached all-time highs. Miners have been struggling to keep up with demand from Chinese steelmills as the world’s second-largest economy accelerates. Iron ore price strength is set to give a marked boost to the government’s financial position when it tables the May 11 budget.

Treasurer Josh Frydenberg last week threw his fiscal weight behind Lowe’s goals. In a speech, he said the jobless rate will “need to have a four in front of it” to generate faster wage growth and higher inflation. Frydenberg signaled a willingness to keep the fiscal spigot open even as the economy’s recovery exceeds expectations.