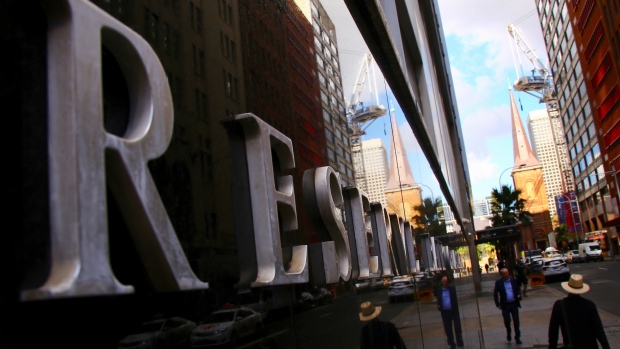 Pedestrians walk past the Reserve Bank of Australia (RBA) headquarters in the central business district of Sydney, Australia, on Wednesday, May 15, 2019. Australia's economy has been weighed down by a retrenchment in household spending as property prices slump and slash personal wealth. , Bloomberg

Reserve Bank Governor Philip Lowe lowered the key rate by a quarter-point to one per cent on Tuesday as expected by money markets and most economists. He is due to address community leaders at an open-air dinner tonight in Darwin, where he is likely to flesh out his thinking on monetary policy and the agenda for the remainder of his visit to the north.

“The central scenario for the Australian economy remains reasonable, with growth a deutsche bank  round trend expected,” Lowe said in his post-meeting statement. “The board will continue to monitor developments in the labor market closely and adjust monetary policy if needed to support sustainable growth in the economy and the achievement of the inflation target over time.”

Lowe’s second cut comes as global trade shows more signs of deteriorating, adding to headwinds constraining domestic demand as a slide in property prices discourages household spending. The resumption of trade talks between the U.S. and China and signs that home prices are beginning to stabilize may provide Lowe room to pause as he waits for his monetary stimulus to flow through the economy.

An easing of lending rules combined with the well-flagged prospect of rate cuts may have begun to encourage buyers back into the housing market, with Sydney property prices rising for the first time in almost two years in June. Along with Prime Minister Scott Morrison’s center-right government’s surprise re-election in May -- on a platform of tax cuts -- the short-term prospects look brighter.

Structural problems remain: the central bank needs annual growth of more than 2.75 per cent in order to soak up spare capacity and drive down unemployment. Lowe has been urging the re-elected government to intensify infrastructure investment and initiate a new round of economic reform to try to lift the economy’s growth potential.

He has argued that the path to lower rates was cleared somewhat by the RBA estimating the new level at which unemployment lifts inflation is about 4.5 per cent, down from the previous five per cent.

Lowe is betting that if the jobless rate grinds lower, workers will eventually be emboldened to ask for larger pay rises and price pressures will then flow through to inflation. Price growth has largely stayed below the bottom of the central bank’s target inflation range of 2-3 per cent for the past few years.

The economy Down Under has slowed in recent quarters and is on track for its weakest fiscal year since 1991.