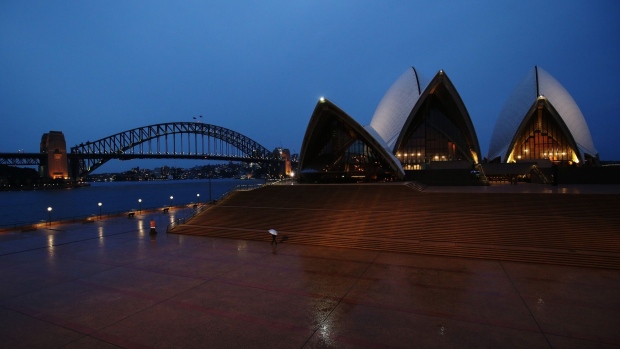 A pedestrian holding an umbrella walks along the Sydney Opera House forecourt during a partial lockdown imposed due to the coronavirus, at night in Sydney, Australia, on Friday, April 3, 2020. Australia's Prime Minister Scott Morrison said the government is close to announcing an agreement that will see rent relief for businesses hit by the coronavirus outbreak. The government wants a new industry code of practice for commercial tenancies, so any decline in revenue for a small- or medium-sized enterprise is reflected in a proportionate drop in rent they have to pay. Photographer: Brendon Thorne/Bloomberg , Bloomberg

(Bloomberg) -- Australia’s economy contracted in the first three months of the year, setting up an end to the nearly 29-year run without a recession as an even deeper slowdown looms for the current quarter.

Gross domestic product fell 0.3% from the final three months of 2019, the first quarterly drop since 2011, compared with a forecast 0.4% decline, statistics bureau data showed in Sydney Wednesday. From a year earlier, it expanded 1.4%, matching estimate

The result sets up an end to Australia’s record run of avoiding two consecutive quarters of negative GDP, having dodged recessions during the 1997 Asian Financial Crisis, the Dot Com Bubble and the 2008 global financial crisis. The current quarter will see a deep contraction, with almost 600,000 jobs lost in April alone and much of the economy in lockdown to contain the coronavirus.

Fiscal and monetary policy are working in tandem to rebuild the economy. The Reserve Bank of Australia has taken the cash rate near zero and lowering the cost of borrowing with its 0.25% bond yield target. The government has injected tens of billions of dollars into the economy to help tide businesses and households through the lockdown.

With the containment of the health crisis allowing activity to resume, how quickly businesses can get back on their feet, workers regain employment and households resume spending is the critical question.

“The rate of new infections has declined significantly and some restrictions have been eased earlier than was previously thought likely,” RBA Governor Philip Lowe said Tuesday after keeping borrowing costs unchanged.

“However, the outlook, including the nature and speed of the expected recovery, remains highly uncertain and the pandemic is likely to have long-lasting effects on the economy,” he said. “In the period immediately ahead, much will depend on the confidence that people and businesses have about the health situation and their own finances.”