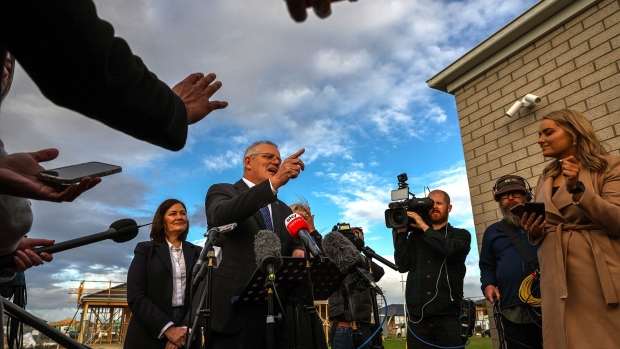 The race for Australia’s next prime minister is tightening before the election on Saturday, with opinion surveys showing the center-right Liberal National coalition government making up ground against the opposition Labor Party.

Prime Minister Scott Morrison and opposition leader Anthony Albanese have been campaigning across the country ahead of the national vote.  The government is asking voters for a fourth term in power off the back of a strong economy and record-low unemployment.

Albanese’s Labor Party has had a clear lead in the polls for most of the campaign, calling for a change of government in response to rising inflation and tepid wage growth, which the opposition has characterized as a “cost of living crisis.”

Two new opinion surveys published this week showed Labor’s lead over the government shrinking. A poll by Resolve looking at two-party preferences found Labor staying slightly ahead at about 52% to the government’s 48%.

But when it came to primary choices, Labor’s vote dipped to 31% while the government’s rose slightly to 34%, while 14% of those surveyed said they were still uncommitted in their final vote. Both Morrison and Albanese had a negative approval rating overall in Tuesday’s Resolve poll.

A poll by Essential published in The Guardian found Labor’s two-party preferred lead over the government shrinking, down to 48% against the Coalition’s 46%, with 7% of voters saying they were still undecided.

Prime Minister Morrison won the 2019 election with a slim majority despite all opinion polling prior to voting day saying he was expected to lose. The shock loss is still on the minds of the Labor campaign, who are cautious in their public and private comments ahead of the vote.

The last week of the campaign has been dominated by a new policy unveiled by Morrison on Sunday which would allow first-home buyers to take money out of their superannuation retirement savings for their deposit.

The plan has been slammed by Labor and many economists for the potential to overheat Australia’s already expensive housing market, but Morrison has dismissed their concerns.

New wage data released on Wednesday will turn attention back to rising inflation across Australia, a major part of Labor’s campaign, with wage growth currently lagging behind cost-of-living.