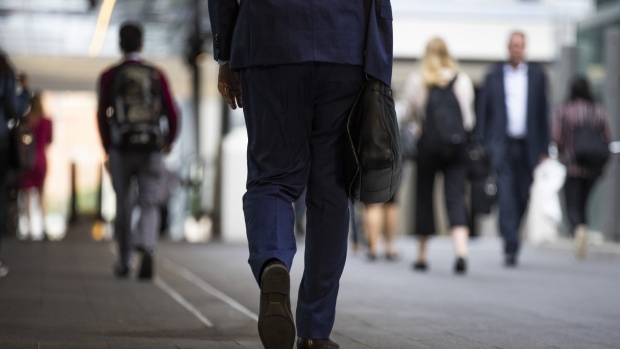 Commuters walk in Sydney, Australia, on Monday, Nov. 11, 2019. Australia is bracing for more devastating bushfires, with swaths of the eastern seaboard and even areas of greater Sydney facing a "catastrophic" threat that's unprecedented at this time of year. , Bloomberg

(Bloomberg) -- Australian wages advanced at less than half the pace of inflation in the three months through June, backing the Reserve Bank’s move to give itself more flexibility on interest rates.

The wage price index climbed an annual 2.6% last quarter, less than economists’ expectations of 2.7% and coming in well below headline inflation of 6.1%, government data showed Wednesday. The currency fell below 70 U.S. cents after the release and government bond yields also declined.

The slightly weaker result may prompt the RBA to use the wriggle room it gave itself this month to return to quarter-point rate hikes in September after three consecutive half-point moves. Governor Philip Lowe has been flagging stronger wage growth is in the pipeline and likely to provide additional support to inflation pressures in the period ahead.

Australia’s labor market is very tight, with unemployment at a 48-year low of 3.5% and vacancies elevated. Economists predict data Thursday will show the jobless rate remained unchanged in July as the economy added 25,000 roles.

In minutes of its August policy meeting released Tuesday, the RBA said liaison showed over 60% of firms expect to raise wages by more than 3% over the year ahead.

“Recent high inflation outcomes were a factor in current wage negotiations, but to date most firms expected to raise wages by less than inflation,” it said.