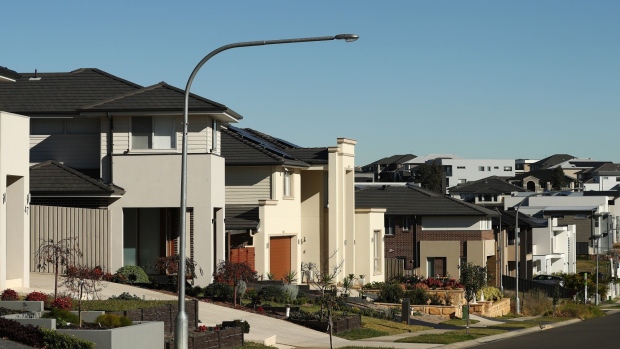 Homes stand in the Bella Vista suburb of Sydney, Australia, on Wednesday, June 3, 2020. Australia’s economy contracted in the first three months of the year, setting up an end to a nearly 29-year run without a recession as an even deeper slowdown looms for the current quarter. Photographer: Brendon Thorne/Bloomberg , Bloomberg

On average, Australians living in high-risk areas like northern Queensland pay A$3,000 ($2,100) in annual premiums, or double that of residents in the rest of the country, an Actuaries Institute report released on Wednesday showed.

Cost pressures are only likely to intensify further as extreme weather becomes more common, said Sharanjit Paddam, an author of the report.

“We are putting our most vulnerable people in the most vulnerable houses,” Paddam said, explaining the burden will fall on those least equipped to manage the cost increases. “Climate change will worsen the pressures for those already facing high or extreme affordability pressures.”

The report comes as new Prime Minister Anthony Albanese legislates a pledge for a 43% reduction in carbon emissions by 2030, following a decade of policy gridlock. Climate change has been a divisive topic in resource-rich Australia, which derives vast income from exports of coal, iron ore and natural gas.

The country’s worst bushfires in a generation in 2019-2020 and recurrent severe flooding along the eastern seaboard this year have shone a spotlight on the consequences of inaction.

Northern Queensland faces the highest median increases in home insurance affordability, while the rest of Australia’s north and central New South Wales state will also see “significant pressures,” according to the report.

Under a “low emissions scenario” with a less than 2°C temperature increase, home insurance affordability pressures would increase by 14% for vulnerable households. Yet there would be very little change for the rest of the country.

Under a “high emissions scenario” where temperatures increase by 3°C by 2100, affordability pressure increases by 20% for vulnerable households.

In both scenarios, significant increases in cyclone, bushfire, and flood risk drive much of the higher costs.

“We have experienced several natural disasters over the past years. These terrible disasters will only worsen over the next 30 years,” said Actuaries Institute Chief Executive Elayne Grace.

“This report will give policy makers insights into home insurance affordability for households, the flow-on effects on the economy, and the implications for planning and disaster recovery.”