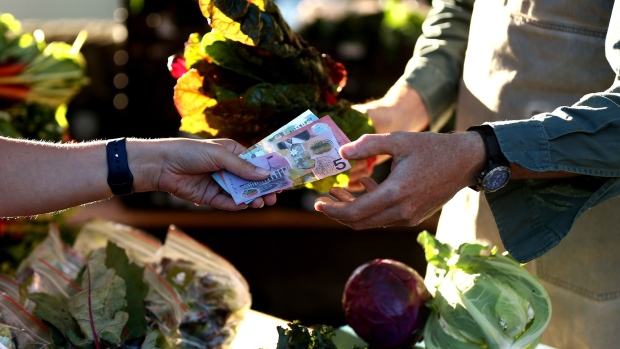 A customer purchases fresh produce at the stall of Moonacres, which comprises of an organic farm, cafe, pop-up restaurant and cooking school, at the Northside Produce Market in Sydney, Australia, on Saturday, Jan. 16, 2021. Australia's economy topped the latest Citigroup Inc. Economic Surprise Indices as authorities' relative success in containing Covid drove a surge in consumer confidence and a rebound in activity. Photographer: Brendon Thorne/Bloomberg , Bloomberg

(Bloomberg) -- Australia’s core consumer prices rose faster than forecast last quarter and returned to the Reserve Bank’s 2-3% target for the first time since 2015, driving a sell-off in bonds and sending the currency higher.

The annual trimmed mean gauge, a measure closely watched by RBA officials, accelerated to 2.1% in the third quarter, compared with economists’ estimates of a 1.8% gain, data from the Australian Bureau of Statistics showed Wednesday. On a quarterly basis, it rose 0.7% versus a forecast 0.5% increase.

Michelle Marquardt, head of Prices Statistics at the ABS, said the price gains were led by new dwellings and automotive fuel.

Markets had been gearing up for an upside surprise after New Zealand’s inflation surged and as global price pressures gained momentum in response to supply chain disruptions and energy shortfalls. Policy makers across the world are locked in debate over whether the spike in prices is temporary or more enduring.

Australia’s headline consumer price index advanced 3% in the third quarter from a year earlier, compared with economists’ estimates of a 3.1% gain, today’s data showed. On a quarterly basis, prices increased 0.8%, in line with expectations.