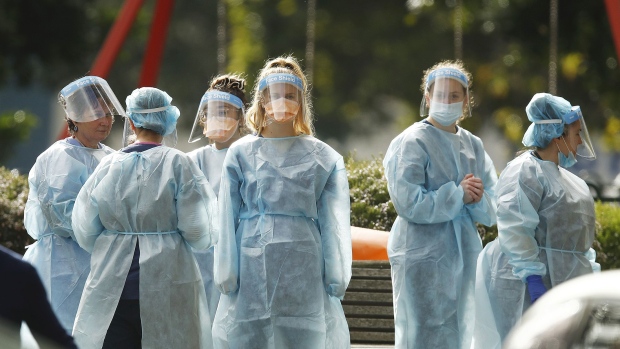 MELBOURNE, AUSTRALIA - JULY 07: Workers in personal protective equipment are seen on July 07, 2020 in Melbourne, Australia. Nine public housing estates are in mandatory lockdown and two additional suburbs are under stay-at-home orders as authorities work to stop further COVID-19 outbreaks in Melbourne. The public housing towers will be in total lockdown for at least five days and the only people allowed in and out are those providing essential services. Residents of 12 Melbourne hotspot postcodes are also on stay-at-home orders and are only able to leave home have for exercise or work, to buy essential items including food or to access childcare and healthcare. Businesses and facilities in these lockdown areas are also restricted and cafes and restaurants can only open for takeaway and delivery. (Photo by Daniel Pockett/Getty Images) , Photographer: Daniel Pockett/Getty Images AsiaPac

Premier Dan Andrews could announce that Victoria’s capital, Melbourne, would move to a New Zealand-style lockdown which would close most businesses, keeping only essential services operating and shutting down most of the city’s public transport network, Sky News reported.

The Age newspaper said the tighter restrictions could be in place for six weeks and begin as soon as Wednesday. Meanwhile, the rest of the state will be placed under the stay-at-home restrictions that metropolitan Melbourne is currently under.

Half-way through a six-week lockdown, the infection curve in Victoria hasn’t flattened. Andrews on Saturday announced another 397 new coronavirus infections, and expressed deep concern about the number of mystery cases it couldn’t trace to a known outbreak.

Covid-19 cases in Victoria have spiked in the past month to be far higher than during Australia’s initial coronavirus wave, which peaked in late March. Hospital admissions and cases in intensive care units are also risen sharply.

Education Minister Dan Tehan, in an interview on Sky News Sunday, said the federal government would “absolutely” support the state if it moved to stronger restrictions.

“We will continue to offer as much support as we can,” Tehan told Sky’s Kieran Gilbert, adding it was in the “national interest” to gain control of the outbreak. “We’ve got to get on top of it.”

“There’s no question these are very difficult times in Victoria.”