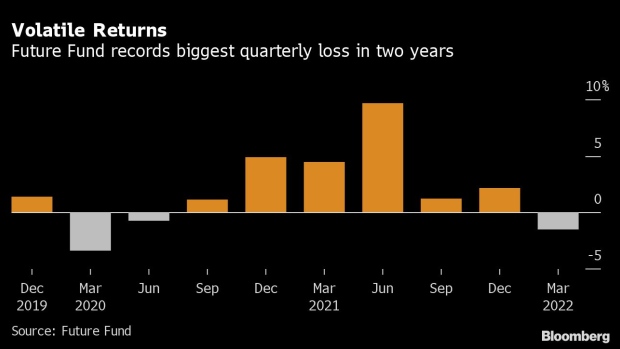 Future Fund lost 1.5% in the three months to March 31, the biggest drop since the same period in 2020, causing its main fund to shrink to A$201 billion ($141 billion) from A$204 billion, it said in statement Monday. At the same time, the fund reduced its cash holdings as allocation into Australian and developed market stocks and so-called alternative assets increased, the statement said.

“As central banks tighten monetary policy to rein in inflation and geopolitical tensions continue to create shocks in investment markets, we have been positioning for what will be a challenging and volatile future,” Future Fund Chairman Peter Costello said in a statement.

The Future Fund was warning of a worsening global outlook even before Russia’s aggression toward Ukraine, anticipating an increase in volatility as central banks remove stimulus and lift borrowing costs to combat rising consumer cost pressures. It trimmed its stock allocation in December, helping to cushion the impact during a turbulent quarter for global equities.

Future Fund Chief Executive Raphael Arndt warned future returns will be harder to achieve given the ongoing fragility in global markets combined with rising inflation. That echoed Norway’s wealth fund, the world’s largest, which recorded a 4.9% quarterly loss in March. The Future Fund is hunting more unlisted assets while relying on its alternative strategies to cushion the portfolio, he said.

Australia’s wealth fund decided on Feb. 28 to drop Russian assets in response to the country’s invasion of Ukraine, but ran into problems with implementing the decision after Russia banned foreigners from executing trades on its stock markets. The fund, which had about A$180 million of Russian assets at April 5, will wind down the holdings as market conditions allow, Costello said.