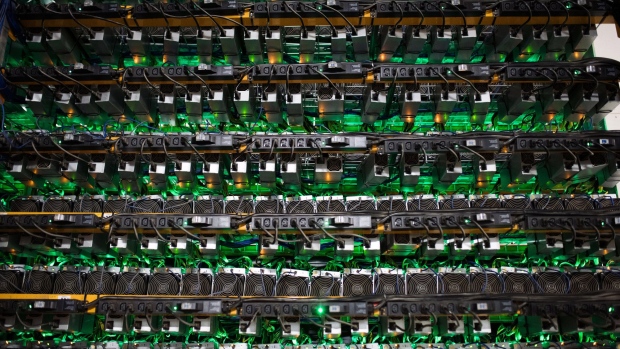 Cryptocurrency mining rigs sit on racks at a Bitfarms facility in Saint-Hyacinthe, Quebec, Canada, on Thursday, July 26, 2018. Bitcoin has rallied more than 30 percent in July, shrugging off security and regulatory concerns that have plagued the virtual currency for much of this year. Photographer: James MacDonald/Bloomberg , Bloomberg

(Bloomberg) -- Australian Bitcoin-focused data center business Iris Energy has doubled a fundraising round to A$40 million ($31 million) ahead of a planned initial public offering.

Iris expanded the offering on Wednesday following a A$13 million commitment from Platinum Asset Management, according to a letter to investors obtained by Bloomberg News. The firm had originally set a A$20 million target for its second pre-IPO fundraising. The company is planning its first-time share sale in the middle of this year.

Separately, the company told investors that Jason Conroy, chief financial officer of energy utility Transgrid, was set to become Iris’ new chief executive officer. He will be joined by David Bartholomew, who will be the company’s independent chair. The two previously worked together for close to a decade at Australian gas pipelines company DUET Group.

Proceeds from the fundraising will be used to build a 50 megawatt data center in British Columbia, Canada, adding to an already-funded 30 megawatt project.

An external representative for the company declined to comment.