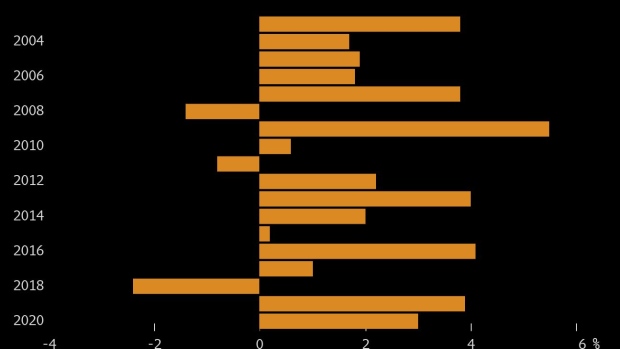 A silhouetted couple at the beach stand near houses in the Tamarama suburb of Sydney, Australia, on Saturday, Feb. 20, 2021. Australia's housing market is booming again, with the biggest monthly price gain in 17 years dispelling fears of a Covid-induced downturn. , Bloomberg

(Bloomberg) -- Australia’s housing market will likely peak late next year and then enter a period of stagnation in response to increased supply and tighter lending curbs, according to Goldman Sachs Group Inc.

Prices will surge 22% this year, then decelerate to a 5% gain in 2022, before turning flat in 2023 and then slipping 2% the year after, Goldman economists led by Andrew Boak said in a research note Tuesday.

Goldman expects Australia’s banking regulator to implement a combination of lending restrictions based on loan-to-valuation ratios and debt-to-income over the next year. Earlier this month, the regulator raised the minimum interest rate buffer that lenders need to account for when assessing loan applications.

The Reserve Bank of Australia has held its key interest rate at a record low 0.1% since November 2020 and has signaled it’s unlikely to start lifting borrowing costs until at least 2024. Policy makers have made clear that monetary policy is focused on trying to boost employment and wages and will not be responding to soaring home prices.

“From a policy perspective, we think the softening in price growth over the next few years supports our relatively dovish RBA rates view, given a near-term hiking cycle would weigh on prices and housing-related GDP growth,” Boak said.

In contrast to the central bank’s outlook, traders are pricing in rate hikes as soon as late 2022 or early 2023.

Boak estimates that if the RBA followed market pricing, housing would fall about 13% between 2022 and 2024, subtracting around 1.5 percentage points from economic growth via a reduced wealth effect and lower housing activity.