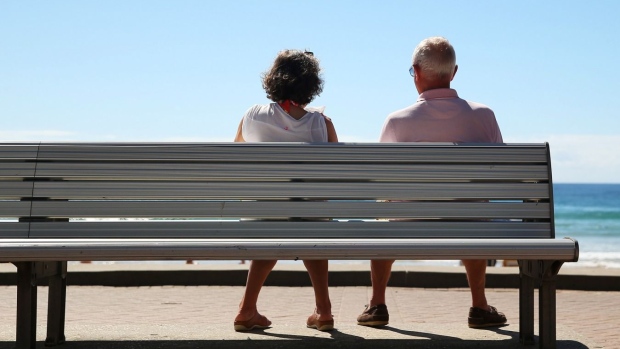 A woman and a man look out towards the beach while sitting on a bench in Sydney, Australia, on Wednesday, April 1, 2015. Photographer: Brendon Thorne , Bloomberg

The Melbourne-based fund is talking to like-minded firms which will help it hit the target “in a couple years,” the A$68 billion fund’s Chairman Wayne Swan said in an interview Wednesday.

“We don’t seek to grow for growth’s sake,” he said. “We seek to grow so we can deliver a higher return to our members, particularly through the reduction in our cost of investment.”

The number of firms managing Australia’s A$3.4 trillion in retirement savings are expected to more than halve within 10 years after a series of reviews found the system was beset by poorly-performing funds and high fees. Australia’s prudential regulator has warned Westpac Banking Corp., Aware Super and Insignia Financial Ltd. to lift performance in some plans, and has told two others to merge with bigger, better-performing rivals.

Cbus has already been a beneficiary of the increased scrutiny. It’s finalizing a merger with Media Super to become a A$70 billion firm, and is conducting due diligence on a tie-up with Energy Industries Superannuation Scheme, a fund the Australian Prudential Regulation Authority told to shutter due to its persistent under-performance and governance issues.

Swan, who took over as chairman this month, will be selective on mergers and not become a generalist fund. Cbus only wants to look after the savings of workers in the property, power generation, mining and manufacturing sectors, he said.

Other comments from Swan, the nation’s treasurer during the global financial crisis: