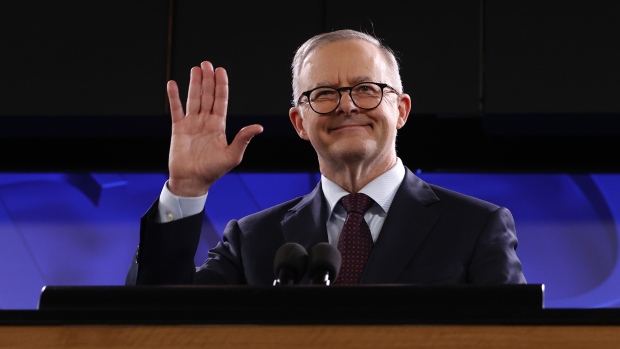 (Bloomberg) -- Australia’s Labor leader Anthony Albanese has picked Indonesia as one of his first diplomatic visits if he wins Saturday’s election and becomes prime minister, saying Canberra needs to build closer ties with the future “superpower.”

“Indonesia will grow to be an economy that’s substantial in the world, we live in a region whereby in the future we will have China, India and Indonesia as giants. We need to strengthen that economic partnership,” he said at the National Press Club in Canberra.

Albanese didn’t lay out specific policies to bring the two countries closer together but said he wanted to expand “people-to-people” partnerships and build engagement with Jakarta including in areas like maritime safety.

The Labor leader questioned why relations between Australia and Indonesia weren’t closer, given the country’s proximity and the fact that Jakarta would one day “be a superpower in the world.”

“We need to really strengthen the relationship,” he said.

Indonesia is the one of the countries closest to Australia geographically, with security ties covering counter-terrorism and border protection. There have been strains in that relationship from alleged abuses by Indonesian special forces in East Timor in the late 1990s to revelations of Australian spies tapping then-president Susilo Bambang Yudhoyono’s phone in 2013.

In recent months, Indonesia has expressed concerns over a new security pact between the US, UK and Australia that will help Canberra build nuclear-powered submarines while escalating tensions with China.

Albanese is currently in the final days of a six-week campaign against the center-right government of Prime Minister Scott Morrison. Recent polling has shown a tightening election contest between the two leaders, with both competing for 76 seats to form government in Australia’s 151-seat Parliament.

He said if he won the vote on Saturday he would be heading to a meeting of the Quad in Japan on Monday, a diplomatic trial by fire where he’d hold talks with US President Joe Biden, Japan Prime Minister Fumio Kishida and Indian Prime Minister Narendra Modi.

Albanese said he would continue elements of Morrison’s diplomatic approach to Australia’s allies, while adding he believed trust needed to be rebuilt with some of the country’s partners.

When asked about reports in the Guardian that the Chinese government would seek a diplomatic reset with whichever leader won the election on May 21, Albanese just said the relationship between the two countries would be “challenging” going forward.