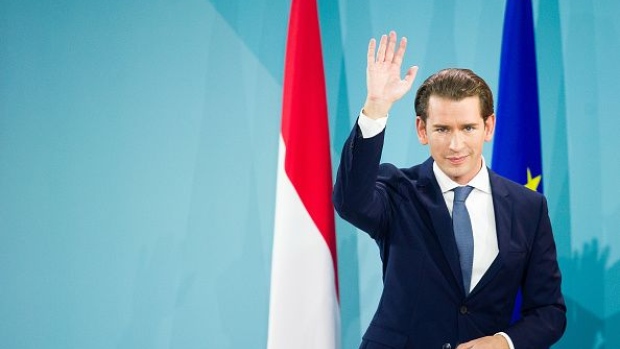 VIENNA, AUSTRIA - SEPTEMBER 29: Former Chancellor Sebastian Kurz of the Austrian People's Party (OeVP) waves to supporters after initial election results give the OeVP a strong, first place finish in elections to the National Council on September 29, 2019 in Vienna, Austria. The elections are taking place following the so-called Ibiza affair, which brought down then Vice-Chancellor and leader of the FPOe, Heinz-Christian Strache, but also eventually led to the dissolution of the entire government. The Austrian People"u2019s Party of former Chancellor Sebastian Kurz is leading solidly in polls going into the election with the Social Democrats (SPOe) and Freedom Party (FPOe) in second and third place, respectively. In fourth place and with likely the biggest points gain is the Austrian Greens party. (Photo by Michael Gruber/Getty Images) , Photographer: Michael Gruber/Getty Images Europe

The corruption probe that forced Sebastian Kurz to resign as Austrian chancellor may have a lasting impact on his political career.

The number of Austrians rejecting Kurz’s return to power in the near future outpace those in favor by more than three to one, according to a survey conducted by Unique Research for the Profil weekly magazine.

Only 22% hope for Kurz’s revival in the short term compared with 73% who oppose it. The share of his backers rises to 69% among declared supporters of his People’s Party.

Kurz, 35 and a rising star in European conservative politics, was forced to resign earlier this month after being named as a suspect in a corruption probe.

He’s looking to clear himself and revive his political career from a seat in Austria’s parliament, while also remaining chairman of his party. Former Foreign Minister Alexander Schallenberg, a close ally, has taken over as chancellor.

The survey was conducted among 800 respondents and had a margin of error of plus or minus 3.5 percentage points.