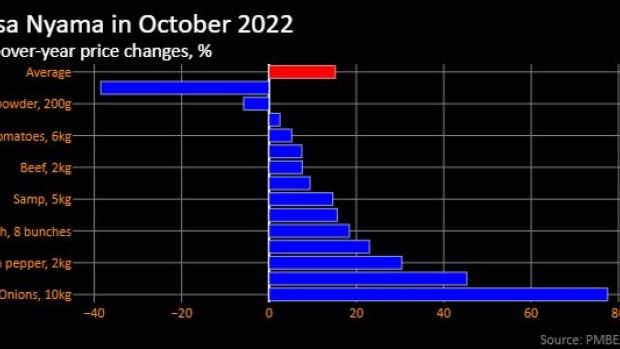 (Bloomberg) -- On any given weekend in South Africa there’s the smell of shisa nyama -- the Zulu term for traditional barbecues -- wafting across cities, townships and rural locations.

But the cost of the typical fare that makes up a shisa nyama is rising faster than official inflation, highlighting the stark reality that low-income earners are suffering the most in South Africa — one of the world’s most unequal nations.

Bloomberg’s new Shisa Nyama Index shows the average price of a backyard barbecue in the likes of Soweto, a Black township on the outskirts of Johannesburg, jumped 11% from a year ago. That compares with a 7.6% year-on-year increase in consumer prices in October, as measured by Statistics South Africa.

Crunching data from the Pietermaritzburg Economic Justice and Dignity group, the index tracks the prices of some of the key ingredients in a shisa nyama — corn meal, onions, carrots, tomatoes, curry powder, salt, frozen chicken portions, beef and wors — a type of sausage made from a variety of ground meat offcuts.

To compile its survey, the PMBEJD’s data collectors track food prices on the shelves of 44 supermarkets and 30 butcheries that target the low-income market in the greater areas of Johannesburg, Durban, Cape Town, Pietermaritzburg and the northwestern town of Springbok.

The index is a window on the impact of inflation on South Africa’s most vulnerable consumers, with even just the cost of onions rising faster than the price of  fuel. The eye-watering vegetable’s price rose 23% month-on-month and has climbed 78% in a year. Over the 12 months, the cost of diesel increased 53%.

“For 10 kilograms of onions I now pay 120 rand ($7), where it used to be between 39 and 50 rand and I don’t know why, it’s not like they’re coming from Russia,” said Oyama Ndaliso, who owns Papa Ron’s Shisa Nyama in Woodstock, a low-income suburb in Cape Town. “In the store, I now have to have two sizes of stews for sale because people can’t afford as much, so they’re going for smaller portions.”

The surge in South African living costs is exacerbating public anger over record power cuts, rampant unemployment and poverty. It raises the risk of a repeat of deadly riots that erupted in two provinces last year and claimed 354 lives.

“Inflation always has the biggest impact on the poor,” said Frank Blackmore, lead economist at KPMG. “The reason for that is they don’t have options in terms of delaying expenditure. Most of the income that’s earned by the poor is required for immediate consumption. That is one contributor to what could be an unrest sort of situation at some point.”

The total cost of buying all of the supplies in bulk to prepare a shisa nyama for friends and family has risen 24% to 1,756 rand, from 1,414 rand in January 2021. While that number may seem cheap after a currency conversion, it’s best compared to South Africa’s national minimum wage, which would have had a general worker earning 3,895.92 rand in October, according to the PMBEJD survey.

To adapt and cling on to customers, retailers like South Africa’s Pick n Pay Stores Ltd. plan to more than double the pace of low-cost food and clothing-store openings in the next year. It’s the same sort of strategy as Shoprite Holdings Ltd., Africa’s largest and typically low-cost supermarket chain, which has been investing in local stores to battle increased competition.

Ndaliso, who started his shisa nyama outlet during the worst of the coronavirus pandemic and is now starting to break even, has had to innovate and find new markets to survive.

“Fortunately we got signed up to Uber Eats,” he said. “Shisa nyama is very in demand and people on holiday here are ordering from their hotels. Covid did well for me because I had no choice. I was retrenched, so I took all my money and opened this restaurant. That was brave -- it was my last money.”

Betty Davigo, 42, works in the John Vul’iGate African Food Restaurant in Imizamo Yethu, an informal settlement in Hout Bay, south of Cape Town’s city center. Everything is more expensive and the restaurant has far fewer customers than it did just a few months ago, Davigo said. As a consumer, she’s also struggling and said she’s buying less for her house, having had to cut out so-called luxuries like peanut butter.

The biggest monthly increase after onions was in the price of cooking oil, which climbed 45%. Other items that rose more than 10% month-on-month included corn meal, samp (made from ground corn kernels) and spinach.