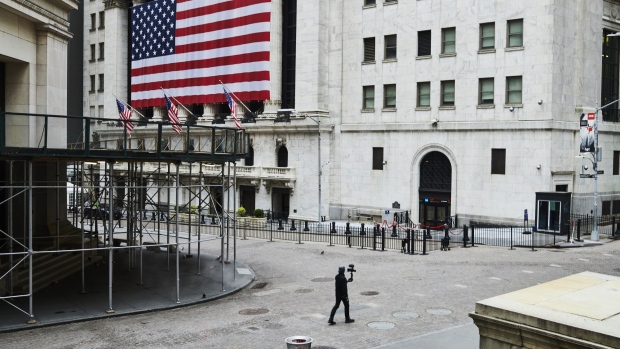 A pedestrian films himself while walking past the New York Stock Exchange (NYSE) on a nearly empty Wall Street in the Financial District of New York, U.S., on Monday, March 30, 2020. Roughly 37,500 people have tested positive for the coronavirus in New York City, officials said on Monday, up about 3,700 from a day earlier. Photographer: Gabby Jones/Bloomberg , Bloomberg

A stock market that was approaching critical velocity last week has quickly reversed course as momentum at its speculative edge faded.

The result was the worst week for the S&P 500 since March, when equities were enduring their most volatile stretch ever. While the last five days were nothing like those, enough similarities exist -- widening losses in small caps and relative strength in tech, namely -- to stir uncomfortable memories.

A version of the S&P 500 that strips out market weighs and is arguably more sensitive to economic twists slid twice as much as the regular benchmark. The winners list was short, dominated by megacaps like Nvidia Corp. and Netflix Inc. whose success could be read as an economic negative.

“A narrow rally is usually a bearish sign,” said Matt Maley, chief market strategist at Miller Tabak. “It tells us that growth in the economy is also very narrow. When economic growth is not broad-based, it’s not a healthy economy.”

The timing is troubling, considering states and countries are beginning to let business resume. Sure, just like the old days, investors are coping with heightened trade tensions between the U.S. and China. But going by what’s working and what isn’t in the market, there’s evidence investors haven’t gotten over their dread about a recession.

Gains are coalescing around the biggest firms and those with a lot of profits and liquidity, a sign insolvency concern remains high. Conversely, companies that qualify as value stocks, those that look cheap across valuation metrics, took a beating. The Russell 1000 Value Index had its third-worst week versus growth in the last decade, pushing a relative ratio of value versus growth to a fresh record low.

”The market has been fixated on a glass-half-full scenario,” said Kevin Caron, portfolio manager at Washington Crossing. “That corporate spreads and small caps have not improved further suggests that more evidence is needed before we can conclude that we are all in the clear.”

The case for value stocks remains weak without macroeconomic improvement, wrote Bloomberg Intelligence strategists including Gina Martin Adams. “There is a historical precedent for value rotation as stocks dig out of recessions, but for stronger leadership to take hold, improvement in the yield-curve spread, inflation and earnings revisions may be needed.”

In recent weeks, the mantra “don’t fight the Fed” was key, as central-bank asset purchases and unprecedented stimulus measures sparked a comeback in stocks, particularly those with shakier finances. If the Fed is buying credit, alleviating bankruptcy risk, why worry about it in the stock market, the thinking went. But the penchant for risk has cooled.

After three weeks in which a basket of companies with high risk of default outperformed those with the best credit health, the trend reversed, and the more precarious firms lagged by four percentage points over five days.

“The median stock is down well into bear market territory. You’ve got a couple of really large companies that are driving the index higher,” said Jason Thomas, chief economist at AssetMark. “Everybody else is just kind of treading water now. Unfortunately I think it’s going to end badly in the near-term in the sense that I don’t feel like we’ve seen a market bottom.”

Once again, large tech companies proved resilient, with Amazon.com Inc. and Netflix posting gains. Much of the megacap dominance reflects the faith investors have for them to not only withstand the crisis but to also potentially come out on the other side stronger. From that perspective, their continuing strength may reflect a belief the recession will last longer.

Since the March 23 low, the largest five companies -- Microsoft Corp., Apple Inc., Amazon.com, Alphabet Inc. and Facebook Inc. -- have accounted for over a quarter of S&P 500 gains, data compiled by Bloomberg show. While accusations have sprung up these stocks trade at high valuations, to many investors the high price-tag is worth it.

FANMAG stocks -- a term now in vogue for the above five companies and Netflix -- boast margins that are two times those of the rest of the S&P 500, according to Pat Tschosik and Rob Anderson at Ned Davis Research. At the same time, these equity giants saw accelerating revenue growth over the past four quarters. “Clearly FANMAG deserves to trade at a premium,” the strategists wrote.

“If investors’ expectations are that growth is going to continue to slow or that a rebound will take longer than originally thought, it makes sense for the growth stocks to be outperforming,” he said. “In a no-growth world, I would argue you would pay a premium for the stocks that aren’t growing.”