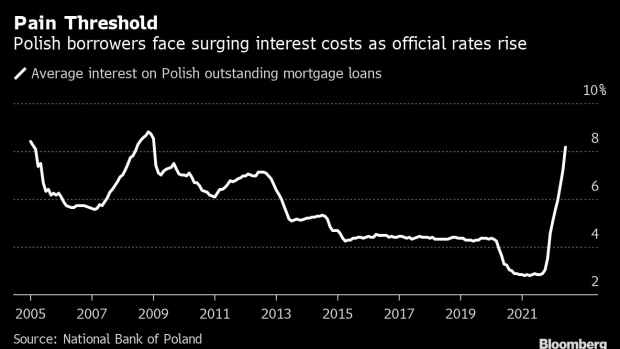 The Q22 skyscraper, left, stands on the city skyline beyond older buildings in the city center in Warsaw, Poland, on Monday, July 1, 2019. "There’s a very serious risk when the Polish prosecutor's office can step into business affairs at any time and with any arbitrary reason," Krzysztof Parchimowicz, a Polish prosecutor, said. Photographer: Bartek Sadowski/Bloomberg , Bloomberg

(Bloomberg) -- Zaneta Olczak has been maxing out her overdraft account and skimping on essentials after her mortgage payments ballooned to about four-fifths of her monthly take-home pay.

Olczak is among half a million Poles who have flooded banks with requests to suspend mortgage payments that in cases like hers have more than doubled as interest rates rose. A new law allowing the loan holiday is the centerpiece of the Polish government’s efforts to contain a cost-of-living crisis eroding its support a year before elections.

Whether the moratorium is going to bring lasting relief amid the highest inflation in a quarter century is questionable. But it has already wiped out $10 billion in market value for Polish banks, including local units of Commerzbank AG, Banco Santander SA, ING Bank NV and Banco Comercial Portugues SA.

“Being a lone borrower after a divorce, I’ve been facing a grim choice,” said Olczak, 46, an office worker from Warsaw. “In the last few months, I often had to decide whether to pay my mortgage, cover utility bills or save on food.”

Polish banks were expected to post record profits this year on the back of rapidly rising interest rates. Now, the industry is bracing for a hit of as much as 13 billion zloty ($2.8 billion) and the government’s largess may curb their ability to lend in the future, according to a presentation by Commerzbank unit MBank SA.

“Times are tough for Polish banks,” MBank Chief Executive Officer Cezary Stypulkowski said at a conference call last week. “As a result of rising charges, our banking sector is the most overburdened in Europe.”

Polish lenders have been repeatedly used as a whipping boy by the government, whose Prime Minister Mateusz Morawiecki is a former bank CEO. The industry has been paying a tax on assets since 2016 and has faced numerous regulatory risks associated with its $15 billion pile of foreign-currency loans.

The latest mortgage-holiday legislation, which kicked in July 29 and targets 2 million creditors, allows borrowers to suspend payments for as many as eight months between now and the end of next year, regardless of their material status.

Fitch Ratings on Friday cut BCP unit Bank Millennium to junk and put ratings of two other lenders -- state-run Bank Pekao SA and MBank -- on review with a negative outlook, citing “the increased willingness of the Polish authorities to intervene in the banking sector and impose large additional cost on banks.”

Banks expect about 70% of households to apply for the relief. It’s likely to be most popular with creditors like Olczak, who borrowed a year ago when interest rates were at a record-low of 0.1% and central bank Governor Adam Glapinski was promising to keep them steady.

Instead, he raised the benchmark for 10 consecutive months to 6.5% in July. This more than doubled monthly cost of payments for 450,000 mortgage borrowers, according to HRE Investments, an advisory company.

So far, there has been little evidence of borrowers falling behind or the industry preparing for loans to go sour. Meanwhile, the index of listed Polish banks has lost 41% this year. This compares with a decline of 27% for Warsaw’s benchmark WIG20 stock gauge and a 7.2% drop in dollar terms in the MSCI Emerging Markets Banks Index.

“Ever increasing state intervention diminishes the sector’s appeal,” said Tomasz Noetzel, a senior analyst at Bloomberg Intelligence. “A slew of regulatory measures makes this and next year’s earnings particularly complicated.”

And the moratorium is unlikely to bring a lasting relief in a country, where some 84% of borrowers pay variable interest on their home loans -- a much higher share than in the Czech Republic and Hungary. Until rates start to fall, clients will need to pay up once their holidays end -- a fact not lost on Olczak.

“The program is seeking to cure gangrene with a band-aid,” she said.