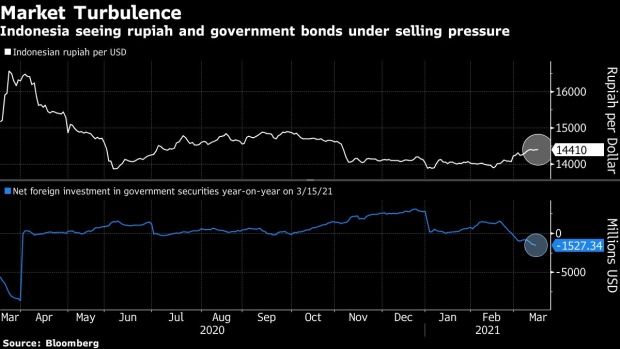 Bank Indonesia kept the seven-day reverse repurchase rate at 3.5% on Thursday, as predicted by all 28 economists surveyed by Bloomberg. Governor Perry Warjiyo and his board have cut the rate by a total of 150 basis points since the beginning of last year to bolster the economy during the coronavirus pandemic.

Thursday’s decision comes with currency concerns back in play as a rise in U.S. Treasury yields has sparked a sell-off in emerging markets. The rupiah has tumbled 2.6% against the dollar over the past month, prompting Bank Indonesia to intervene in markets. Sovereign bonds had seen $1.5 billion of outflows this year as of Monday.

Keen to maintain an interest-rate differential with other countries to attract foreign funds, Warjiyo and his board have said room for further cuts is limited. The latest draft of an omnibus bill that would align the central bank’s mandate more closely with government priorities, and formalize its direct funding of government bonds, has concerned markets, though less so than when reforms were first mooted last year.

Both the central bank and the government have stepped up measures -- such as easing rules on mortgage and vehicle loans, cutting the tax on car sales and boosting the stimulus budget -- as they try to meet the target of around 5% economic growth this year. The nation’s vaccination rollout is also expected to boost confidence and business activity.

Surveys have shown consumer confidence and spending on the recovery track. However, headline and core inflation continued their downward trend last month, allowing the central bank to keep policy loose.