The Bank of Canada resisted pressure from investors to signal it will soon follow global peers in easing monetary policy.

At a decision Wednesday, policy makers left interest rates unchanged for a seventh straight meeting and surprised markets by asserting current levels of stimulus are still appropriate despite the escalating trade war between China and the U.S..

The Bank of Canada’s reluctance to signal a greater willingness to cut rates has made the central bank an outlier as counterparts around the world ease policy. Investors and analysts had expected more dovish language, paving the way for some easing later this year. The Canadian dollar rose after the statement.

“This is a bit more hawkish than we anticipated,” said Brett House, deputy chief economist at Bank of Nova Scotia.

To be sure, the door is still open for increased stimulus given how much the central bank underlined trade risks. Policy makers also said Canadian growth is likely to slow in the second half of this year. Investors are anticipating the Bank of Canada will eventually be forced to join other central banks like the Federal Reserve in cutting rates, as soon as next month.

Do you think the Bank of Canada provides enough guidance on its policy decisions?

But Wednesday’s statement suggests the central bank remains reluctant to show its hand on the matter, preferring instead to wait for more concrete signs of weakness before moving.

“The Bank is not committing to anything,” Doug Porter, chief economist at Bank of Montreal, said in a note to investors.

The Canadian dollar rose 0.8 per cent to $1.3237 per U.S. dollar at 12:14 p.m. Swaps trading suggests investors are fully pricing in a cut by December, with strong odds of a second reduction by this time next year. That’s still less than the four rate cuts priced by the Federal Reserve over that time.

Canada’s benchmark S&P/TSX Composite Index pared an earlier gain to 0.5 per cent after the statement, which the market saw as “largely one of disappointment,” according to Candice Bangsund, portfolio manager at Fiera Capital.

The case for cheaper money isn’t as compelling in Canada as it is elsewhere. A strong run of economic data affords the Bank of Canada opportunity to resist -- as it has so far -- the dovish turn in global policy.

Interest rates also remain stimulative in real terms, even with the Bank of Canada on hold, mortgage rates have already fallen sharply in recent months because of the decline in global bond yields. In other words, there is plenty of stimulus in the system that the Bank of Canada already needs to keep in mind -- a development the Bank of Canada cited in its statement.

“In sum, Canada’s economy is operating close to potential and inflation is on target. However, escalating trade conflicts and related uncertainty are taking a toll on the global and Canadian economies,” the central bank said in its statement. “In this context, the current degree of monetary policy stimulus remains appropriate.” 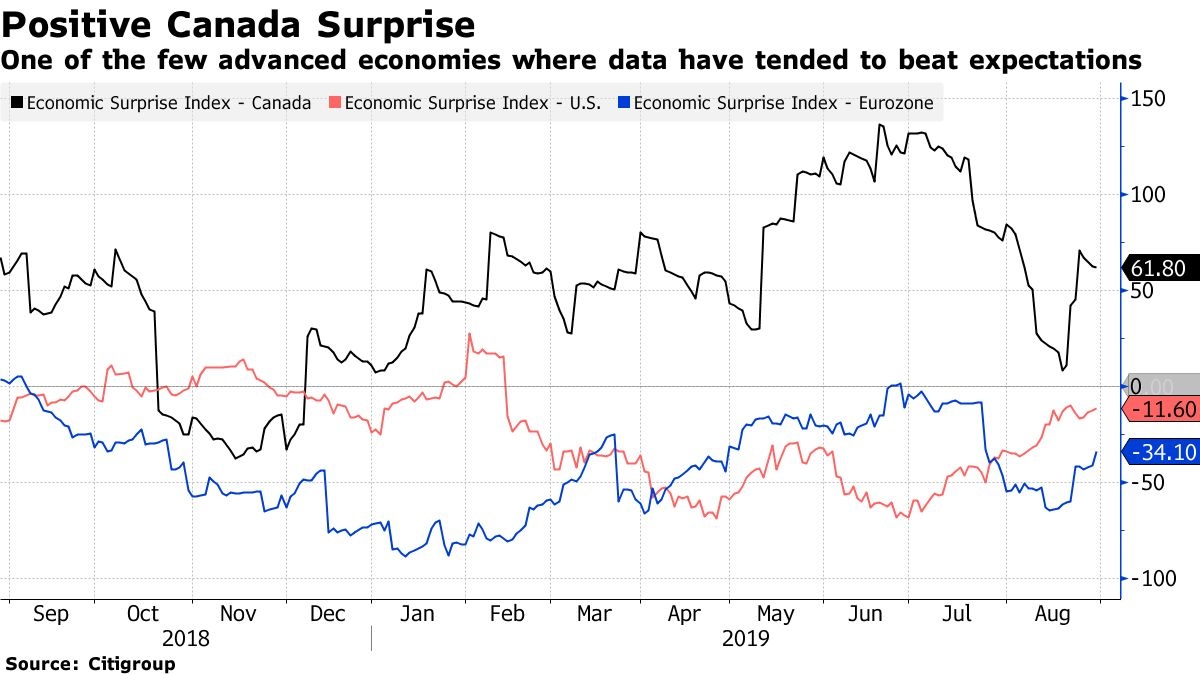 But escalating tensions between China and the U.S. are hard to overlook. The trade war is impacting global economic momentum more than it had projected in July, and driving lower commodity prices, the Bank of Canada said. So, officials will need to pay close attention to “global developments and their impacts on the outlook for Canadian growth and inflation.”

Waiting too long is a risky strategy, however. It could backfire if policy makers are late to recognize spillover effects on businesses and households, particularly since the country’s outlier status on policy could potentially fuel gains in the Canadian dollar.

“The Bank of Canada is stalling but it will eventually be peer-pressured into interest-rate cuts,” Frances Donald, chief economist at Manulife Investment Management Ltd., told BNN Bloomberg.

--With assistance from Erik Hertzberg and Divya Balji