The Bank of Canada is expected to start a series of interest rate hikes this week to wrestle inflation down from a three-decade high.

All 27 economists surveyed by Bloomberg News anticipate Governor Tiff Macklem will raise the benchmark interest rate by a quarter percentage point to 0.5 per cent at a policy decision Wednesday. The Bank of Canada is also seen unveiling part of its plan to shrink holdings of government bonds acquired over the past two years.

The rate move would be the first increase in borrowing costs since 2018, starting what’s expected to be one of the fastest hiking cycles since the central bank adopted an inflation target three decades ago. Markets expect a total of six hikes over the next 12 months. Russia’s invasion of Ukraine is unlikely to deter the Bank of Canada, with surging prices for commodities buffering Canada from any broader global economic fallout.

“A hike this week will be the first step in the most consequential tightening cycle in decades,” Royce Mendes, head of macro strategy at Desjardins Securities Inc., said by email. “Central bankers need to slow red hot inflation without causing a recession.” 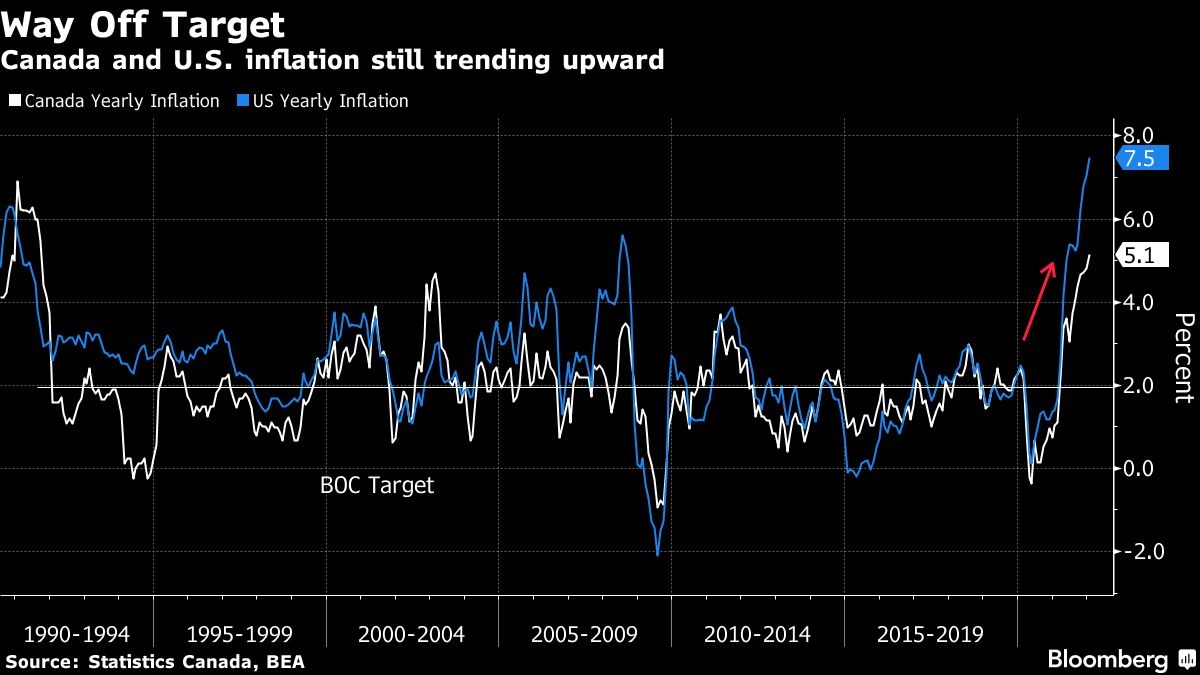 Wednesday’s decision at 10 a.m. in Ottawa is a statement-only affair with no new forecasts. But Macklem will give a speech and hold a news conference Thursday, where he’ll provide more insight into the decision.

The Bank of Canada, which has held its benchmark at the emergency level of 0.25 per cent since March 2020, has already begun laying the groundwork. At its last policy decision in January, Macklem warned higher borrowing costs are imminent in an economy at full capacity and no longer in need of extraordinary stimulus.

The central bank has also sought to reassure Canadians that despite a relatively optimistic outlook for inflation, officials are prepared to adjust quickly should price pressures prove to be stickier than forecast. Inflation is currently running at a three-decade high of 5.1 per cent, but officials continue to blame global supply chain issues that they anticipate will fade in coming months.

In its latest projections, the Bank of Canada sees inflation falling back to about 3 per cent by the end of this year and near its 2 per cent target in 2023.

“We will be nimble -- and if necessary, forceful -- in using our monetary policy tools to address whatever situation arises,” Deputy Governor Tim Lane said in a Feb. 16 speech.

“We expect a 25-bp hike, in our view -- but express a willingness to ratchet up the pace if needed. A clear signal of another move in April is likely, as is language that flags balance sheet roll-off is imminent. Conflict between Russia and Ukraine is unlikely to shake the BoC’s resolve to start normalizing rates.”

There are risks to consider as lending costs rise, and the process will be a delicate balancing act. Canadian households are some of the most indebted among advanced nations. Housing is primary growth driver, a sector likely to cool as the cost of borrowing increases.

Markets are betting the Bank of Canada’s overnight policy rate will hit 1 per cent by June, and 1.75 per cent by this time next year. Banks use that benchmark to price borrowing costs for clients on variable-rate mortgages.

“Once the policy rate rises above 1 per cent, financial stability considerations will come to the fore,” Simon Harvey, head of foreign exchange analysis at Monex Europe Ltd., said by email.

The invasion of Ukraine and resulting global market turmoil are complicating the decision.

Even as it prepares to withdraw stimulus, the central bank will be ready to quickly pivot on policy and inject liquidity into financial markets should investors become even more rattled. Surging commodity prices, meanwhile, will only fuel inflationary pressure, and drive up incomes and demand in Canada’s resource-based economy. It’s a messy policy environment.

Macklem told lawmakers last month he’ll be deliberate and clear on rate hikes so that “monetary policy is a source of confidence rather than another source of uncertainty.” That in itself would have made a half percentage point increase this week unlikely. The events in Ukraine effectively rule out that possibility altogether.

In an interview with the Globe and Mail in January, Macklem said one option would be to start with a few rate hikes followed by a pause to “assess the situation” before moving again.

The Bank of Canada can also withdraw stimulus by allowing its bond holdings to run off rather than raising its policy rate -- giving it some flexibility on the pace of hikes. The central bank has seen its holdings of federal government bonds rise by about $350 billion (US$275 billion) during the pandemic, and is expected to provide direction on Wednesday on its plans to unload those assets.

“The Bank of Canada will likely provide more guidance this week on how quantitative tightening will work,” Citigroup Global Markets Inc. economist Veronica Clark said by email. “That includes whether they end the full amount of reinvestments initially, or ramp up gradually.”